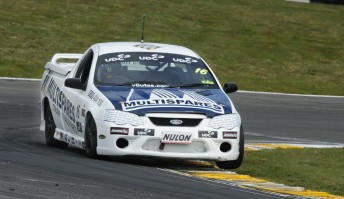 Kris Walton invincible in Round 4 at Taupo

Kris ‘Killa’ Walton dominated the fourth round of the UDC V8 Ute series at Taupo, the Aussie ace winning all three races at the Taupo 400 BNT NZ SuperTourers meeting.

Dominant in wet or dry in his Peters Motorsport Multispares Ford Falcon Ute, Killa extended his points tally for 2014 to a more than healthy 541, over 170 ahead of his nearest challenger.

And while the runaway series leader looks to have an unbreakable lead, there is plenty of intrigue behind him with Brett ‘The Scud’ Rudd and Mike ‘Buzz’ Lightfoot ending Round 4 equal on points and joint second overall on 378 points.

Geoff ‘SOS’ Spencer is lurking just seven points behind them in fourth ready to pounce in the final two rounds at Hampton Downs and Pukekohe.

Whilst Walton’s drives were serene in variable conditions, the round will be remembered for the unique stoppage in the final race when the start and finish line gantry began to crumble and collapse under the force of the wind in the sails of a sponsor banner.

RACE 1 – WALTON SHOWS THEM THE WAY

It was business as usual for Kris ‘Killa’ Walton in his Peters Motorsport Ford V8 ute this afternoon at Taupo – as he won the first race of the fourth round of the UDC V8 Ute series at a canter.

It was Peter ‘Kaos’ Ward drew pole position in the marble draw but he was always going to be under pressure from the fastest ute in practice, that of series leader Walton.

At the start Walton shot through and immediately took the lead, with Ward stumbling away and also falling prey to Chris Berry and Geoff Spencer.

Into Turn 2 and Spencer made a move on Berry but the two utes clashed, putting Berry into instant retirement.

It was also the end of the race for Ward, who hit the accident and ripped his front wheel off.

At the end of a busy lap one it was Walton from Robb, a fast starting Collinson, Barry, Spencer, Lightfoot, Rudd, new boy Barbera and the rest. Lap two accounted for Urquhart who had to retire with Peter Robb falling down the field.

Walton’s second full lap was a blistering 1.46 and effectively put a sword to the field by being around one second quicker than the best of the rest.

This left Barry in second and Collinson in third for a Ford 1,2,3. And it was another Ford in fourth as Mike ‘Buzz’ Lightfoot. The others got into their stride a lap later but the damage was done and by the end of lap three Walton was six seconds up the road.

At the halfway mark of the eight lap race, Walton had a commanding lead, with ‘Bazza’ Barry six seconds in arrears followed by Collinson going well in the Panorama Motorsport Ford who himself had a decent gap ahead of fourth placed Lightfoot.

Further down the field, Geoff Spencer and Brett Rudd were enjoying a good battle, with only a tenth between them at any one time on lap times.

Into the second half and Collinson began to pile on the pressure to old rival Barry – these two having a bit of a history in the Suzuki series.

At one stage the gap was just two tenths, and on lap six Collinson found his way past and immediately started to stretch out, revelling in the handling of the NZ-built Ford. But there was no catching Walton, who streaked away for yet another win.

Collinson and Barry completed the top three, with Lightfoot then followed by Spencer, Barbera, Rudd and Robb rounding out the finishers.

In damp conditions it was circumspect UDC V8 Ute field that set off for Race 2 with Brett ‘The Scud’ Rudd going back to front and starting from pole via the reverse marble draw grid format.

The field held station for the first portion of the race but once again the man on the move was Kris ‘Killa’ Walton – fast making this year’s UDC C8 Ute series his own – and he was up and into the lead by the end of lap three and disappearing up the road thereafter.

Rudd held on well to take a solid second place, driving well in the conditions to put seven seconds on the closely matched Fords of Sam ‘Bazza’ Barry and Glen ‘Coyote’ Collinson – the latter proving his early meeting pace was no fluke and demonstrating the Panorama Motorsport Ford is now right on the pace.

Fifth was Geoff ‘SOS’ Spencer, perhaps driving a little more cautiously than usual after a suspended penalty was handed to him on Saturday evening for causing the Turn 2 incident that caused all the drama in Race 1.

Points leader for the round Walton guaranteed himself a pole position start for the final eleven lap race and promptly scorched away to establish and early and unassailable lead. There was drama for the fans at Turn 1 at the start too, as Peter ‘Kaos’ Ward thumped Mike ‘Buzz’ Lightfoot’s rear.

Sam ‘Bazza’ Barry suffered an early scare when his Ford ute broke an engine mount and locked up the steering causing him to spin. He made it back to the pits and did get out again, but at a vastly reduced pace.

By half way Walton had established a comfortable six second lead over Glen Collinson – who had broken away from the pack but seemed unable to do anything about the flying Walton.

It was shaping up to be a great last six laps behind Walton and there was plenty of close action in the pack, with third placed Mike Lightfoot and Mason Barbera engaged in close combat for the early part of the race, separated by just a few tenths and with Brett ‘The Scud’ Rudd just a few car lengths down, himself defending from a hard charging Peter ‘Rocketman’ Robb. Urquhart, Berry, Ward and Barry completed the chasing pack.

The race was stopped after five laps when the red flag was brought out for one of the more bizarre incidents in New Zealand motor racing history.

A large banner erected between the two trackside start/finish line and lights gantries had caught the increasing and heavy wind like a sail and started to pull the gantries, and the pit wall, from the ground.

When the whole lot crumbled under the pressure, race officials had no choice but to halt the race six laps before time.