UDC V8 Utes return for second half of season

UDC V8 Utes return for second half of season 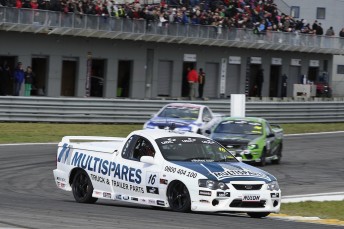 Runaway UDC V8 Ute series leader Kris ‘Killa’ Walton was the dominant driver of the first three rounds at Highlands Motorsport Park, the Fuchs 500 at Pukekohe and the V8 Supercar round at the track, and he returns to Taupo for the second time having won races and impressed there last season.

Walton is running both the New Zealand series and the sister Australian V8 Ute series that like the UDC championship, runs as the main sideshow to the country’s top V8 sedan series.

He has been the most successful driver in both series too and has stepped up from Rookie of the Year in Australia to be a major title contender there this year.

His championship lead in NZ meanwhile, sits at an impressive 104 points. Is he insurmountable?

Well, mathematically no, but the other experienced drivers in the UDC series will need to make large dents in his points lead this weekend to have a serious chance of getting back in the game this year.

A field of 14 utes at Taupo will include all of the regulars, plus Mason ‘Chuey’ Barbera, new driver from Australia who has joined the series for the remainder of this season and all of next season and Chris ‘Balli$tic’ Berry in a second Panorama Motorsport run Ford.

Also new for the round is series supplier Australian Transmission Components (ATC) who have supplied the common ration gearboxes for the series’ Holdens – as they have for the Australian V8 ute racing series. These technical changes to the Holden transmissions will further enhance parity between the two breeds of V8 racing ute in New Zealand – meaning even closer racing!

Sam’ Bazza’ Barry has impressed everyone with his raw speed this season – his first in V8 Utes – and he will be looking for a clean weekend where he too can focus on getting the results that the speed indicates are possible.

He’s had a bit of damage this year, but after some driving in Australia – most notably at Sandown just two weekends ago – he can be expected to be right on the pace right from the word ‘go’ in the Bel Group Ford. He will be race sharp and could easily be top Kiwi.

It’s a trio of Holdens that lead the charge after the Peters Motorsport Ford in the points table, however, with veteran Peter ‘Kaos’ Ward heading that charge.

After a relatively slow start to the season, the veteran has been getting quicker and quicker and moved into second place in the series as a result of a great round at the V8 Supercar meeting back in April. A showman ‘extraordinaire’ behind the wheel of one of these 400bhp monsters, Ward is the perfect blend of entertainment and speed and will be aiming to take a good points haul at Taupo after a big crash there last year scuppered a good points tally from the round.

Behind Ward, Geoff ‘S.O.S.’ Spencer has been another one amassing good points and he also took a very popular race win at Pukekohe’s Fuchs 500 round, backing that up with another competitive showing at Round 3.

He sits alongside the ever-improving Brett ‘The Scud’ Rudd who got agonisingly close to securing his first win at Pukekohe last time out and will be another fired up to keep Walton on his toes.

Spencer kept his eye in during the winter with some endurance racing that included a weekend at Taupo, so of the two, he perhaps is the one that can take the fight directly to the leaders. And watch out too this coming weekend for Peter ‘Rocketman’ Robb. He won a race at the last Pukekohe round – his first ever in the series – and has been hard at work with driver training and preparation in the mid-season break as he aims to capitalise on that momentum.

Mike ‘Buzz’ Lightfoot sits fifth in the series and would have hoped for more at the half way stage, but his Ford was very quick indeed at Taupo last year and he can be expected to be one of the front runners at the round. Having the speed is one thing, and taking a big points score is quite another – so the focus for the driver of the lurid green Falcon Ute will be to secure those vital points to catch the guys in front.

James ‘Huggi’ Urquhart returns for a second half of the season where he will be hoping for no major incidents after three incidents in the first three rounds effectively ended any serious shot at a good result in the championship. His spare ‘hot lap’ Ute has been rebuilt into a full racer and his original car is being straightened out – potentially for a second Mitre 10 Racing team member, so there is plenty happening in the Urquhart camp ahead of the weekend.

Practice takes place on Friday with qualifying and racing on Saturday and Sunday as the principle support series to BNT SuperTourers over the weekend.