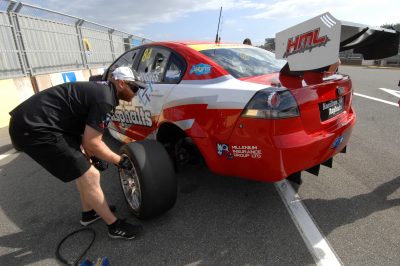 As the 2017/18 BNT V8s Championship approaches its final round of the season – competitors will be analysing the quality of their Dunlop tyres banks for their final three races at Hampton Downs next weekend.

Class one competitors are able to purchase a maximum of eight new Dunlop tyres at each of rounds one and two, six at each of rounds three and four, and four new tyres for each at rounds five and six – taking their season total of tyres to 36.

In class two, competitors are able to purchase a maximum of six new Dunlop tyres for each of rounds one and two, four tyres at rounds three and four, and two tyres at each of the two final rounds of the season, bringing the total to 24.

What it means for competitors, is that they have to carefully manage their tyres throughout the season, and perhaps saving some new tyres for crucial races later in the season, potentially sling shotting their championship position.

In class one, Nissan Altima driver Nick Ross says teams do play various strategy cards throughout the season to maximise on track performance.

“You do try and save them at the start. But if you are at a track and have good pace you use what you have to get ahead,” said Ross.

The Altima driver’s tyre bank took bit of a hit following a big off track excursion at Teretonga in January.

“Our tyre bank is not as good as it was prior to Teretonga. When the wing let go we lost three new tyres due to blistering after the spin.”

Ross believes that with everyone largely in the same boat as far as the quality and number of tyres on hand for the final round, he thinks a couple of competitors could hold a card up their sleeve.

“Lance Hughes and Jack Smith have some good tyre numbers left I think. Jack had a bad run down south so collected a good stock pile. I think the two Toyotas have about the same as us.”

Lance Hughes, owner of Hamilton Motorsports, confirmed himself and Jack Smith have a good tyre bank for the final round.

“We have a good tyre bank and will have two new sets of tyres for each car,” said Hughes.

“We have tyres to burn.”

Hughes also said he was hoping for wet weather to hit the North Waikato circuit.

“Our cars have been well suited to the wet conditions this season, if it does rain we’ll be in a good position.”