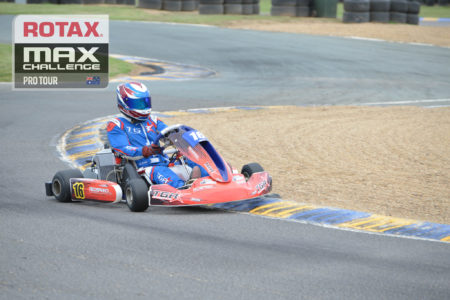 Hamilton was the only junior representative in the team and in a large field of near thirty drivers had his work cut out! Hamilton putting himself inside the top twenty in qualifying and as the session continued on tried to work his way into the top fifteen. Armand settled in position fourteen on the grid and was looking towards the opening heats to try and make his way forward through the field. Hamilton had a rough start to his heats with an unfortunate DNF in heat one but turned things around in a big way. Armand burst into the top ten with an eighth in heat two and another strong position ten in heat three. Hamilton continued his progress forward in the pre final once again making his way inside the top ten and into position nine and was ready for a big final. Hamilton putting in his race of the weekend matching lap times with the leaders and coming home just outside the top five in position seven! Armand will be a young driver to watch in the rest of the 2022 series!

Fitzsimmons was the sole driver in the Rotax Light category for the team going up against a world class thirty four driver field. Hamish contested a hotly fought qualifying session and put himself in the fight for pole position and inside the top five for majority of the session. Fitzsimmons put himself on the inside of the third row in position five overall! Hamish put in a scintillating opening heat moving up to position two and setting the fastest lap on the way! Fitzsimmons came home in position two and three in the remaining two heats putting himself off the front row for the pre final. Hamish had another third in the pre final and was looking to battle for victory in the final. Hamish was right in contention for victory when an incident on lap six put him outside the top twenty five in a hard luck story. Fitzsimmons moved his way back up to position thirteen by race ends in a storming drive grabbing more valuable points for his championship assault!

Matthew Greenbury was the final representative for the TGR crew taking on a field of near twenty karters in Rotax Heavy. Greenbury was right in the battle in qualifying making his way into the top ten and then into the top five challenge for pole position. Matt put in an awesome lap coming only two tenths off pole position and setting the fifth fastest time. Greenbury’s opening two heats he put in strong performances coming home inside the top five in position five in heat one and fourth in heat two. Heat three Greenbury was involved in an incident on the opening lap dropping him to the rear of the field. Matt made his way up to position eleven grabbing more valuable points. Greenbury in his best drive of the weekend was able to come home in second position in the pre final setting up for an epic final. Matthew once again put in a strong performance in the final moving up to position three and trying to chase after the front two. Greenbury came home on the podium in position three overall in a great drive.

Team owner and manager Tyler Greenbury spoke post-race weekend of the teams weekend. “Our drivers and team worked hard all week and I am extremely happy with the speed we had at this event. Hamish Fitzsimmons was challenging for race wins all weekend, unfortunately luck didn’t go his way in the final but he showed how good he can be. Matt Greenbury struggled with a stomach bug all weekend but brought the team home a great third place finish. Armand Hamilton ran in the top five throughout practice and ended up finishing the weekend in seventh showing good speed in a faster class than he normally runs”. Tyler Greenbury Racing will be back at Ipswich Kart Club this weekend for their club championship round!