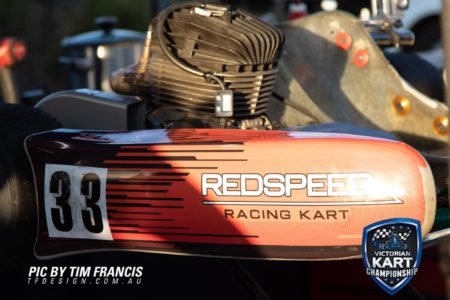 Another weekend, another race track, another state for Tyler Greenbury Racing, as they took on the Victorian Kart Championship at the Eastern Lions Kart Club. Greenbury took a team of five drivers across four classes to Puckapunyal, looking for state championship glory, while also preparing themselves for the third round of SP Tools Australian Kart Championship on the first weekend of June.

Thomas Gallagher led the charge for the team running in the TAG 125 Light class against thirty-five other competitors. Gallagher put in a superb effort in qualifying jumping up onto to pole position and putting himself out of the box seat for the opening tow heats. Thomas did a superb job to come home in third spot in the opening heat but a starting infringement relegated him down to position fifteen. The star driver was able to take out heat two in a return to form to conclude Saturday. Position eleven wasn’t where Gallagher wanted to finish in the third heat but had his eyes fully forward. In a storming drive through the field in the final, Thomas was able to make his way inside the top five and as high as second position throughout the final. Gallaher in his first time at the track came home just off the podium in position four overall in a great recovery!

Armand Hamilton and Jett Adamson was the two-driver attack that took on the KA4 Junior Light class. Hamilton led the way in qualifying for the team landing just outside the top fifteen in seventeenth. Adamson set a time good enough for position thirty and was looking to move forward. Both drivers did a great job moving forward in the heats with Hamilton getting inside the top ten in position eight and Adamson as high as position twenty-two. Hamilton was looking right in contention for the top places running as high as fourth place when an unfortunate DNF in the closing laps took him out of contention. Adamson did an excellent job to come home with his best result of the weekend in position twenty in a great learning experience being his first time at the circuit.

William Gallagher was the sole driver for Tyler Greenbury Racing the KA3 Junior category. Gallagher qualified in position thirty in the forty-kart field and was looking to move forward across the heats. Incidents in heat one resulting in finishing outside the top thirty-five and a DNF in heat three hurt William’s chances. A position twenty-six in heat two was the highlight but still had Gallagher starting down near the rear of the field. William put in a nice drive in the final, moving his way inside the top thirty in position twenty-nine overall. William was another driver taking his first start at the track and took great knowledge away from the weekend.

Hamish Fitzsimmons was the final driver for Tyler Greenbury Racing and his weekend started tough, only being able to set one lap due to dropping a chain. This had the x30 racing star down in position thirty-two. A DNF further hurt Hamish chances until a storming drive in heat two got the young mans weekend back on track, coming home in position fourteen! Fitzsimmons bad luck unfortunately returned for Sunday finishing down the order in heat three and having another DNF in the final. Hamish pace was fast across the weekend and he’ll be one to watch come the SP Tools Australian Kart Championship in June.

Team owner and manager Tyler Greenbury spoke post weekend on the team’s results. “It was an up and down weekend for team. Thomas did a great job and only some bad luck on Saturday cost him a podium and potential win. Tough weekend for the rest of the guys but we’ve taken a lot out of the weekend in preparation for the next round of the nationals here in a month”. Tyler Greenbury Racing will be back at the track this weekend for the Ipswich Kart Club for their club championship.