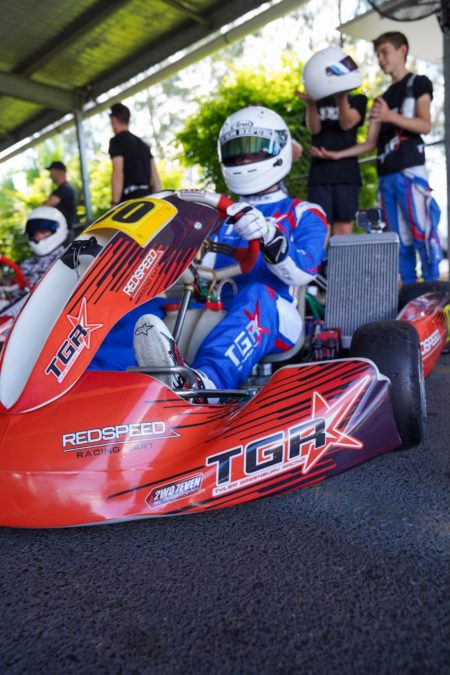 Tyler Greenbury Racing took a team of nine drivers across five classes to the latest round of the Ipswich Kart Club over the weekend. With over two hundred and seventy entries taken and multiple state and national champions in attendance, the racing was going to be thick and fast. Greenbury a multiple time Australian champion in his own right was looking to lead his team forward!

Tag 125 Light had Thomas Gallagher and Lucas O’Conner representing the Tyler Greenbury Racing team. In a field of over thirty drivers Gallagher was able to land himself inside the top fifteen in position fourteen for heat one with O’Conner just behind in position fifteen. Both drivers were able to move forward nearly ten spots in their opening heat! O’Conner led the charge for the remaining two heats, jumping back up inside the top five for both heats with a second and a third. Gallagher had a much better remaining two heats, like O’Conner he finished in the top five in third for heat two. He then continued his strong results coming in the top ten in position eight for heat three! In a close final with many top level drivers racing at the front. Gallagher was able to come home on the podium in third spot overall! O’Conner put in another strong performance in position four overall inside the top five.

Harlen Bell was the youngest driver representing the Tyler Greenbury Racing team in the Cadet 9 category. Bell got a great start to his weekend running inside the top five in both the opening heats. Bell didn’t have much luck from this point after putting himself on the outside of the second row. Bell dropped back off the start in heat three and fought his way back into the top ten but was classified down in position sixteen. Harlen was involved in another incident in the final resulting in a DNF result for the young driver. Bell showed his pace was strong enough and look out for the young driver at the next round.

Jett Adamson and Arman Hamilton were the two drivers in the ultra-competitive KA4 Junior Light class. Adamson started in position fourteen for the opening heat but was slowly able to progress his way forward into the top ten by race end. Hamilton was able to also move forward starting outside the top twenty. Armand moved up to position sixteen by race end. Adamson had another great result in heat two, moving up to eighth position while running in the top five throughout the races. Hamilton took the team’s first race win of the weekend in race two, leading from lights to flag in a dominate performance for the team! Adamson once again showed good pace and good racing coming home for another strong eighth spot overall in heat three. Hamilton was able to grab another excellent result coming home inside the top five in position four, setting himself up for an exciting final! Hamilton set himself in position four in the early stages of the final but made his way up as high as second spot! Armand was able to bring the team home another podium in third spot overall! Adamson raced his heart out after settling outside the top ten in the early stages. Jett came home just outside the top ten overall in eleventh spot with another strong performance!

TAG 125 Heavy had Finlay Derry, Wagner Cardoso and Harrison Fox all taking their place in the Tyler Greenbury Racing team! Cardoso led the way in heat one with a top ten finish of ninth. Derry and Fox weren’t far behind him both coming home inside the top fifteen in twelfth and fourteenth respectively. Derry put in his best result of the weekend so far in third overall, with Fox also in the top ten in eighth in heat two! Cardoso had another strong top fifteen finish in thirteenth. Cox led the charge in heat three with eighth position overall, with Derry also in the top ten in position ten. Cardoso came home once again in the top fifteen in position fourteen overall. The final was a tough and hard race for all three drivers. Cardoso, Fox and Derry came home in position thirteen, fourteen and fifteen overall in a tough field!

William Gallagher was the final team member to take his spot in the ultra-competitive KA3 Junior class. Gallagher had a great start to his weekend coming home with a strong third place in the opening heat and going even better with a second race win for the team in the second heat! William continued to run at the front of the field with another strong second in heat three. In a close but fast paced final, Gallagher was able to come home with the team’s third podium of the weekend in third spot overall!

Team owner and manager Tyler Greenbury spoke post weekends on his team’s result. “It was another great weekend grabbing three podiums. We did a lot of testing and preparation for the Australian Kart Championship in two weeks. We’re really pushing hard to be challenging for victories everywhere we go for the rest of the season”. Tyler Greenbury Racing will be back on circuit next weekend for the Australian Kart Championship in South Australia.