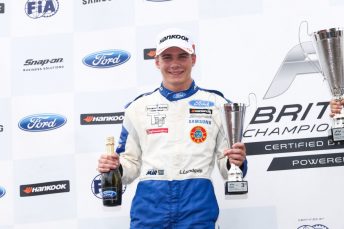 Double R Racing’s Linus Lundqvist made a consistent and competitive start to the second half of the F4 British Championship certified by FIA – powered by Ford season at Snetterton 300 Circuit over the weekend, 29th/30th July, with two more podium finishes during the sixth event of the campaign.

After a lengthy summer break for British F4 since Lundqvist’s memorable double victory at Croft back in mid-June, the Swedish racer maintained his top three championship placing at Snetterton with third position in round 16, fifth in round 17 and third again in round 18.

Unfortunately for team-mate Karl Massaad, a top 10 finish in the weekend’s first race was the highlight of his weekend after two highly frustrating retirements in the subsequent contests, each a result of contact from rivals. Double R Racing’s third British F4 driver Daniel Cao wasn’t in action this weekend but is scheduled to return at Rockingham in August.

“It’s been a good consistent weekend for Linus and we’re obviously happy with two podiums”, said Anthony ‘Boyo’ Hieatt, Double R team principal, “We needed a bit more pace, though, so we’ll get some testing done before Knockhill to get back on it and try and be back challenging for wins.

“Karl didn’t have much luck this weekend, being punted out of two races is never great, but his top 10 in race one was competitive and the pace was pretty strong. We didn’t take away as many points as we wanted from Snetterton, but it wasn’t a bad weekend really.”

Lundqvist was the fastest Double R driver in qualifying, securing fourth on the grid for round 16, just 0.4 seconds shy of the front row, with Massaad only just missing out on the coveted top 10 with the 11th best time, only 0.1 seconds shy.

Following a good start to the first of Saturday’s two races, Lundqvist made his intent clear and after taking third place he piled on the pressure to Ayrton Simmons. Remaining within 0.4 seconds of his rival, the pair circulated pretty much nose-to-tail for the first half of the race and into lap seven he was just a tenth of a second shy over the line.

On Bentley Straight, though, Lundqvist momentarily got stuck in fifth gear which allowed Logan Sargeant to move past. Determined to retake his podium placing, Lundqvist hit back on lap 10 to once again assume third which he then held to the flag a lap later.

In the sister Double R Racing machine, Massaad quickly moved up into the top 10 and began to apply significant pressure to Manuel Sulaiman. In a race where overtaking proved to be at an absolute premium Massaad also had to have his eyes keenly focused on his mirrors to keep Patrik Pasma at bay, which he achieved with aplomb to secure 10th place – just 0.2 seconds shy of ninth.

For round 17 later in the day, Lundqvist started seventh on the partially reversed grid but quickly moved into sixth and set about making more inroads. Taking fifth on lap two, the Swede then broke into the top four on lap four as another podium became increasingly likely.

Racing then fell under Safety Car conditions on lap five as a result of an incident involving team-mate Massaad. Having started on the fifth row, the Lebanese driver maintained position initially before moving up into ninth on the second tour.

Well placed to make more gains, his hopes were then hit on lap four after contact from the car of Hampus Ericcson which resulted in retirement for Massaad. With the Double R machine depositing fluid on the track, the cautionary period was called.

At the re-start on lap seven, Lundqvist ran very close behind Alex Quinn but a challenge for the podium went awry on the ninth tour when he was edged back to fifth. At the chequered flag on lap 10 he was just 0.2 seconds shy of the top four.

Massaad’s terrible misfortune showed no sign of abating in the third and final race of the weekend on Sunday afternoon when opening lap contact resulted in another highly unfortunate retirement for the No.14 Double R car, which started 10th on the grid.

Team-mate Lundqvist didn’t have an entirely drama-free race himself, but he managed to overcome early worries to secure his seventh podium of the season and the Swedish talent also recorded the fastest lap of the contest – a time of 1m52.949 seconds.

Starting the race from fourth on the grid, Lundqvist held position through Riches and into the hairpin he made a late attempt on the brakes to grab third on the inside. Despite a slight lock-up, and minor contact with Sargeant’s car, Lundqvist emerged from the turn in third and he stayed there race-long.

Just 0.8 seconds behind the lead duo into lap three, Lundqvist remained in touch initially but then had a fairly lonely race in third. Confirming his pace with the fastest race lap, the Double R driver did his championship placing the world of good with another well-deserved rostrum result.

Knockhill Circuit in Fife, Scotland, will host the next three rounds of the British F4 season just a fortnight from now, over the weekend 12th/13th August.

Before then, Double R will be back in action with its BRDC British Formula 3 squad next weekend, 5th/6th August, at Brands Hatch Grand Prix Circuit in Kent – the team’s ‘home’ track.