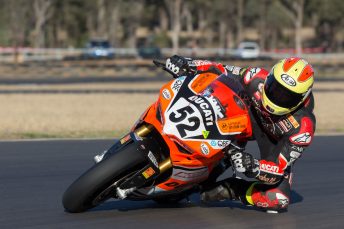 Corey Turner (Desmosport Ducati, 1299 Panigale) once again delivered the most points of the rookies at Round 5 Morgan Park Raceway for the Yamaha Motor Finance Australian Superbike Championship presented by Motul Pirelli (ASBK), earning him ‘Rookie of the Round’ in the Yamaha Motorcycle Insurance Superbike (YMI) Championship class, winning a pair of IXON Racing Gloves as part of the SHARK Helmets Rookie of the Year Award thanks to Ficeda Accessories.

Newcomer to the YMI Superbike class, Turner incredibly finished on the podium for his debut on the Desmosport Ducati. In Race One, Turner finished second, just behind ASBK mainstay Wayne Maxwell (Yamaha Racing Team, YZF-R1). In Race Two another podium was within his grasp, until he crashed with only a handful of laps to go. Thankfully, Turner was able to remount and still finish in an impressive eighth position.

The Queensland based rider has so far impressed with the transition to the YMI Superbike Class after his recent return to Australia. Tuner has taken the past three successive ‘Rookie of the Round’ awards. Turner hopes to continue make an impact and become the SHARK Helmets Rookie of the Year. Fellow Rookie, Mitch Levy (ATR, Yamaha YZF-R1) was also extremely impressive, scoring a sixth place in Race Two. Levy currently resides within second in the Rookie standings

Turner shared his thoughts after attaining that second place; “I can’t thank everyone enough for making their way down to Morgan Park Raceway. The boys at Desmosport Ducati worked very hard throughout the weekend. We had a few moments throughout the race but we managed to catch up to the leading pack and secure that second place. Big thanks to Fecida for the gloves,”

Fellow Rookies, Spriggs and Buckley were not present at Round 5 Morgan Park Raceway due to injury.

At the conclusion of the Championship, the rookie rider topping the points chart will be generously presented with a crafted trophy and a SHARK Helmet.