Trophy titles on the line at Wakefield Park

Trophy titles on the line at Wakefield Park 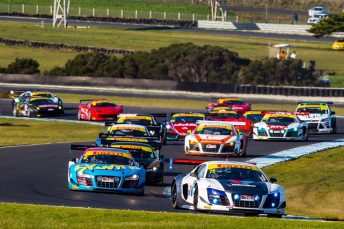 All three CAMS Australian GT Trophy Series presented by Pirelli class titles will be decided this weekend as the final round of the season heads to Wakefield Park.

Tense points battles exist in Trophy, Challenge and MARC classes, with just two races remaining in the campaign, and a maximum of 220-points available for any driver able to top every session in their class.

In Trophy Class, Steve McLaughlan and Rod Salmon are locked in battle with just 49-points between the two Audi drivers.

McLaughlan, aboard the Valvoline Jamec Pem Racing entry, has won four times in 2017, while Salmon has picked up two victories along with a swathe of podium placings in his Skwirk Online Education Audi R8 LMS Ultra.

They’re the only two drivers in the title hunt, with third-placed Richard Gartner just five-points too far back to claim the title in his Safe-T-Stop Lamborghini Gallardo.

Of the three titles on the line, Mark Griffith’s task is the easiest in Challenge Class, the Griffith Corporation driver holding a 61-point advantage over Scott Hookey’s Fiorano Motorsport Ferrari 458 Challenge.

Hookey and Griffith come directly from Highlands Motorsport Park, where they co-drove a Mercedes-AMG GT3 to eighth-place in the final round of the CAMS Australian Endurance Championship last weekend.

John Nikolovski and Jamie Arratoon also remain in contention for the title, the pair having shared duties at Queensland Raceway and Phillip Island before climbing aboard their own Ferrari 458 Challenges this weekend.

An impressive outing from youngster Aaron Cameron at Queensland Raceway saw him rocket to the top of the MARC Class field, where he holds a slender ten-point advantage over Jake Camilleri.

However, neither driver has entered this weekend, leaving an open goal for Keith Kassulke and John Goodacre to steal the title away at the final round.

Kassulke missed the previous round at Phillip Island, while Goodacre has been a mainstay of the competition throughout the 2017 season.

The fly in their ointment will be two more, yet to be named MARC Cars Australia drivers, who could take valuable points away across the weekend’s two 50-minute races.

Also among the 18-car field is Travers Beynon, who had in a breakout performance at Phillip Island as he controlled much of the weekend’s opening race.

The Whitlock Bull Bars and EAT Furniture Audis of Con Whitlock and Rio Nugara round out a nine-car Trophy Class field.

Adding extra flavour to the Challenge Class battle is Australian GT Trophy Series debutante Andrew Clarke, who will pilot a Ginetta G50 for the weekend, the only non-Ferrari entry in the five-car class.

The weekend’s track action kicks off at 10:50 on Saturday morning with opening practice ahead of two qualifying sessions, the first at 12:50 which flows immediately into Qualifying 2 at 13:20.

Race 1 then starts Sunday’s proceedings, with the green flag set to wave at 09:15 with the final race of the 2017 CAMS Australian Trophy Series presented by Pirelli set for a 12:40 start.

Fans will be able to watch all the action with both days streamed live via the Australian GT Facebook page.