Tritons wow in the west

Tritons wow in the west 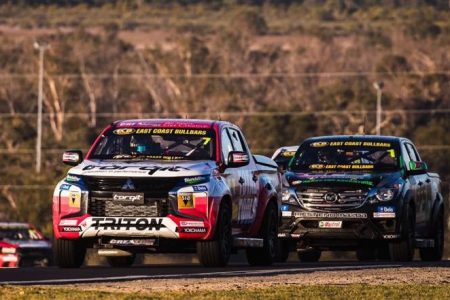 Perth played host to round two of the 2019 ECB SuperUtes Series for the Pirtek Perth Supernight.

The tight technical Barbagallo Raceway provided an opportunity for the all diesel dual cabs to hit their strides and show some amazing racing in a weekend that truely detailed just how close and competitive the series is becoming.

Practice saw fast times and with the results so close only a blanket could cover the front running cars. Team Triton’s, Elliot Barbour led most of the sessions eventually placing second by a slim margin.
Cameron Crick in the Total Tools entry was fourth pressing through some technical issues.

Qualifying was up next with Barbour P3 and Crick P5, with the gap covering the top 5 Utes was only 2 tenths of a second.

With the field so tight the racing was set to be fierce, with the opening race seeing Barbour push all the way finishing a close second, with Crick retiring mid race with a spectacular failure.

Race 2 would have to be one of the best displays of racing in the category’s short history with a five way battle for twenty laps, with Barbour and Crick in the mix all the way.

Eventually it was Harris to prevail with Barbour 2nd.

‘That was some cool racing, much respect to Ryal, we had the speed to win we just needed a few more corners and we would have got the win. Although we are the bridesmaid in this one it sets us up for the final. The racing was a great display of where this category is now and how good it will be in the future!’ Elliot Barbour

The final race was a good old fashion dual, Barbour again finishing the bridesmaid but taking the equal points win for the round and a fast finishing Crick taking rounding out the podium in 3rd.

‘Ah that’s such a great feeling, to be able to show our true potential was just reward for the early frustration, I feel I can take it up to the front runners for sure now, bring on the next round.’ Cameron Crick.

With such a strong showing for the round it sets up Barbour for a good old fashioned championship fight, moving to second in the series standings, just 8 points off the lead.

‘I am extremely happy, the round win would have been nice but to finish equal on points and jump to 2nd in the standing, its gloves off now I am in the hunt!’ Elliot Barbour

The series now heads to the rural Victorian Winton Motor Raceway for round 3, it will also see the return of Dakar winner Toby Price for his first drive of the season.