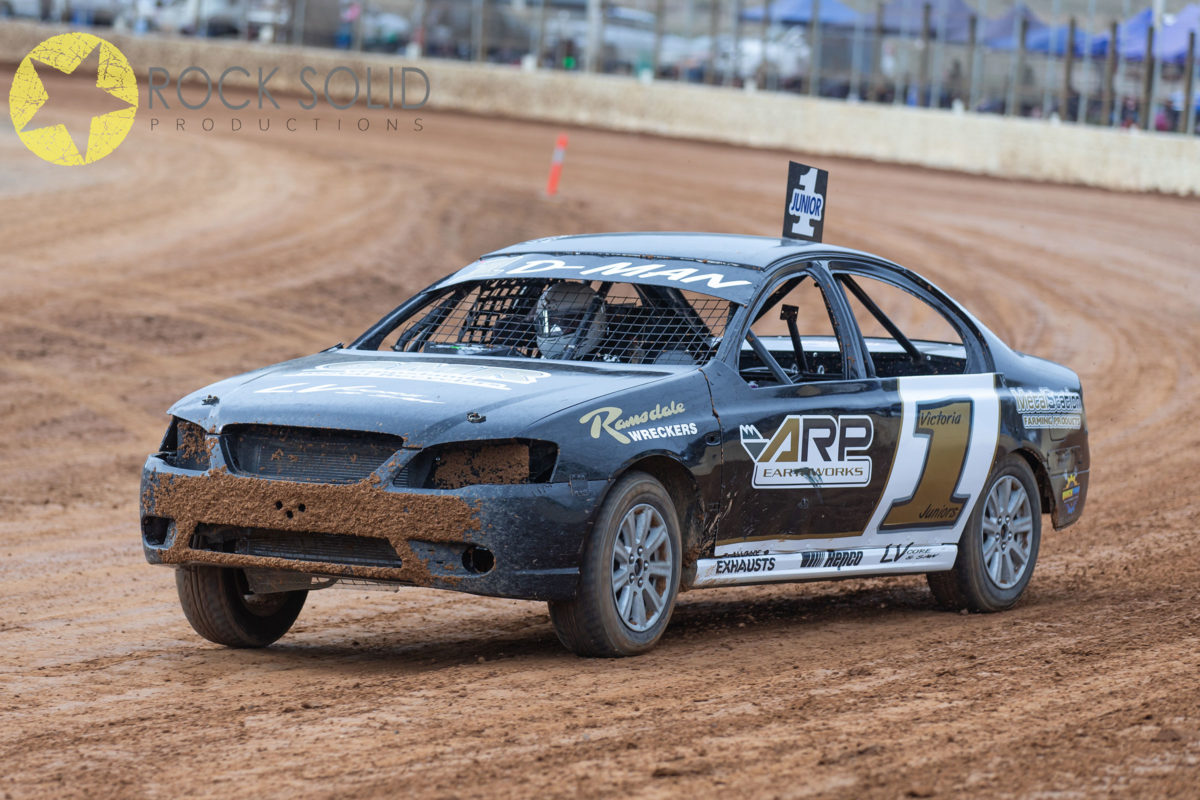 Alexandra and District Speedway Club for the second weekend in succession has held a successful and entertaining race meeting with titles on the line. This weekend West Australian Kayne Dellar, Warragul youngster Damon Ingram and Alexandra club member Damien Miller came out as champions in their classes after a terrific two-night show.

In the SSV Juniors title, four heats each round across five rounds determined where drivers would sit in qualifying points that determined if they had to run through a last chance main or direct into the title race at the end of the weekend.

In round one Dellar from Western Australia, Linken Paterson from Healesville, Dylan Barrow from Wandin, and Aidan Rigby from Queensland were winners. In round two another West Australian won the first heat, then another followed him in Brody Day winning the next, followed by Dellar making it a trifecta for the West before Tasmanian Brandon Austen won the last of round two.

Tasmanian Lachlan Robins won the first of round three, Dellar made it three from three winning again, Australian Champion Carter Metcalfe won his first of the weekend with Oldfield winning a second heat race ending night one.

Into night two racing Linken Paterson took a second win for himself for the weekend to start round four, then Metcalfe from Mildura and Will Shore another from Sunraysia and Rigby for his second win.

Rounding out the qualifying in the final round another West Australian picked up a win in Donny Davis, Metcalfe won for a third time as did Paterson then Rigby. In the last chance qualifier for the title race, River Spitzbarth from Northern Territory, Logan Mair from South East Melbourne, Lachlan Bull from Swan Hill, and Tamika Simpson from Woori Yallock qualified into the big race.

The twenty-five-lap title race began with Dellar, Metcalfe and Paterson the top three on lap one with Paterson on his home track moving to second the next time around. At the ten-lap mark Dellar lead Paterson, Metcalfe, Oldfield, and Rigby and seven cars were already out of the race with fifteen to go. On lap sixteen Metcalfe moved to second however Paterson kept him under pressure and reclaimed second on lap twenty-three.
As the chequered flag dropped at the end of lap twenty-five the new Victorian champion was determined to be Kayne Dellar from Paterson, Metcalfe, Rigby, and Shore.

In the Junior Standard Saloon Victorian title they also competed through five rounds with three in each round. Starting with round one Harry Cecil, Nathan Miles and Owen Cecil all form the South Gippsland Nyora Club took wins. Harry Cecil and Miles took a second win each in round two with Linken Paterson who was doing double class racing duty across the weekend winning in the third heat of round two.

Owen Cecil began round three with his second win followed by another Paterson victory and a third win to Ingram. On night two in round four Miles, Dylan Barrow and Harry Cecil were the winners with Paterson, Ingram and Harry Cecil winning the final qualifiers in round five.

A twenty=five lap title finished the weekend for the Standard Saloon Juniors with Ingram leading lap one from Harry Cecil and Miles, Paterson and Jack Braz. Barrow was the big early mover in the top five by the end of lap five and at lap ten Ingram lead Harry Cecil, Paterson, Miles, and Blake Smith with Barrow out of the race. Owen Cecil moved to fifth ahead of Smith by lap fifteen and at lap twenty Harry Cecil had snatched the lead from Ingram.

Ingram fought back to the front the very next lap and on lap twenty-three as Owen Cecil and Blake Smith exited the race local Alexandra member Noah Collette moved to fifth. At the drop of the chequered flag the Victorian champion was declared as Ingram from Harry Cecil, Paterson, Miles, and Collette.

Open age racing in the form of the Sports Sedans were the final of the three Victorian titles for the weekend with five rounds also that was made up of three heats each round. Round one began with Steve Kershaw from Healesville, Luke Fallon from Alexandra and Damien Miller from Pakenham, all Alexandra members winning to start the night.

Kialla woman Felicity Roycroft won the first heat in round two from Shane O’Brien the top driver from the Nagambie club, and Ian Thomsen a veteran racer. Another Alexandra club triple winning result in round three with Dillon Taylor and then brothers Damien and Brendan Miller taking the W’s.

On night two Eastern Suburbs racer Josh Service took his first win of the evening with Brendan Miller picking up another and Harry Orme his first winning result of the weekend. In the final round Jackson Barneveld, Robert Garlick from Badger Creek, and Steve Kershaw once again all Alexandra club members were the winners.

A twenty-five-lap title race with Service and Damien Miler starting from the front and Fallon, Shane O’Brien, Barneveld, and Nathan O’Brien all up the pointy end of the grid. Service had the better start leading the first five laps ahead of Miller and Fallon with Roycroft moving into the top five by lap four. Barneveld and Nathan O’Brien exited the race on lap seven changing the top five to Miller as he took the lead then Service, Fallon, Shane O’Brien and Roycroft.

Roycroft moved to third by lap eight ahead of Fallon and O’Brien. At lap twenty Miller lead Service, O’Brien, Roycroft and Fallon. As twenty-five laps were completed the Victorian title victory went to Miller from Service, O’Brien and after a penalty handed by Stewards to Roycroft, fourth became Fallon with Dennis Reid in fifth and Roycroft back to sixth after crossing in fourth.

Alexandra Speedway has had a huge two weekends with a tremendous effort and a lot of hours put in by their volunteers and officials. Now they get a couple weeks break before they do it all over again.