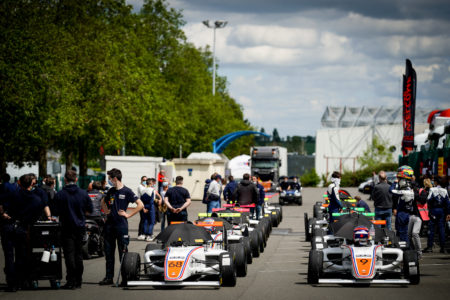 Australian teenager, Hugh Barter has overcome qualifying drama to secure three podiums in the second round of the French Formula 4 Championship at Magny-Cours.

The Richard Mille Young Talent Academy driver suffered from a lack of vehicle balance during qualifying, however still managed to place the car on the front row for the opening race.

Throughout all three races, Barter was able to get his machine to the front and was heavily in the fight for race victory. The opening race was one of the tightest of the season thus far, Barter putting the race leader to the test entering the final lap. A light brake lock cruelled Barter from being able to chase down his second win of the season.

With consistency being the key, Saturday evening’s second race was crucial. The Melbourne-raised 15-year-old forged ahead in the race which features a grid reversing the top 10 from qualifying. He was able to finish in third position.

The final race on Sunday saw an entertaining stoush among the top group. Barter was able to emerge as the second placed driver and also secured the fastest lap of the race.

The three podiums see Barter remain second on points, some 17 shy of the Championship leader.

Barter, who now lives in Le Mans in France, returns to action in July with the third round of the French F4 Series at the Hungaroring in Hungary.

He will continue training with the Richard Mille Young Talent Academy between races.

The Richard Mille Young Talent Academy is a collaboration between Nicolas Todt’s All Roads Management, kart manufacturer – BirelART and renowned luxury watch manufacturer Richard Mille. Barter was awarded the scholarship into Formula 4 after a global young driver shootout that was conducted at Le Mans in October 2020.

“To walk away with three podiums after a difficult qualifying was a great result,” said Barter. “I had to fight hard to be in the mix and was right amongst it, particularly in the first race where I was challenging for the race win on the final lap.

“To still be second in the Championship is equally a terrific result. The Richard Mille Young Talent Academy team have been doing an outstanding job and it is awesome that we are able to continue challenging for the Title.

“The next round is a couple of months away at another F1 circuit in Hungary. My time between races will continue to focus on training and fitness.

“The next event is crucial from a Championship point of view, so I have to be absolutely ready to go when we arrive at the Hungaroring.”