Trio of fifths for Courtney Prince in Sydney Porsche Sprint

Trio of fifths for Courtney Prince in Sydney Porsche Sprint 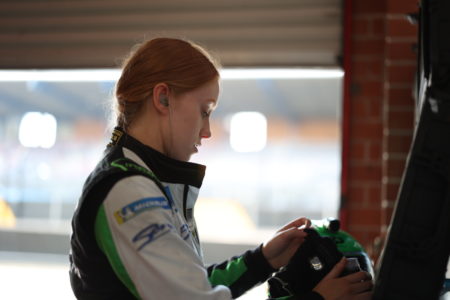 Courtney Prince has finished fifth in each of the three Porsche Michelin Sprint Challenge races at Sydney Motorsport Park this weekend.

The 18-year-old Pro Class racer was impressive in her Team Sonic Porsche, collecting a huge bag of points in the second round of Porsche’s ‘development’ category.

While the young gun was pleased with the results, she rued some missed opportunities that could have seen her even higher up the ladder.

“It was a solid weekend and we were somewhere up the pointy end of the field,” said Prince.

“We did struggle to match the guys up the front. There was something missing there for us, but we’ll work on it.

“It was a big haul of points, which is good for our championship, so we’ll head to Morgan Park with an aim to go even better.”

In Team Sonic’s Amateur Class, Graham Williams saw the highs and lows of motorsport all flood through over the weekend.

Sunday, however, was a different story. He continued his good form in Sunday’s early race, only to get involved in an incident in the last race that caused him to drop down the order Porsche.

“Yesterday was a great day, but then today came and it was not quite as good,” said Williams.

“I got a little ambitious coming onto the front straight. I ran out of kerb on the exit and (Matthew) Belford got past me and then I was turned around.

“i fought back a few places, but it was just a little disappointing. But still, overall, it was a great weekend.”

The next round of the Porsche Michelin Sprint Challenge will be held at Morgan Park at the end of June.