This Saturday night is gearing up to be the biggest race meeting of the season for Hession’s Auto Parts Grafton Speedway, with no less than three blue-ribbon events on the program, including the NSW Modlite Title, the rerun of the NSW SSA Junior Sedan Title and the V8 Dirt Modified Rumble. 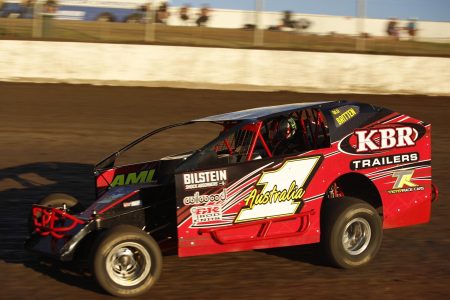 Not only will the Saturday night’s schedule be headlined by these three major events, a number of national and state title champions will also be in attendance, further bolstering what will to doubt be an action-packed night of racing.

Leading the charge in the NSW Modlite Title, current Victorian Champion Klinton Hancey will bring an exciting edge to the event as he attempts to defend his NSW Title, with the versatile racer also having claimed an upset victory in the Queensland V8 Dirt Modified Title earlier this season.

After last month’s NSW SSA Junior Sedan Title was cancelled midway through due to inclement weather, the junior drivers are eager to return to the track to contest this Saturday night’s rerun.

Topping the points after the qualifying heat races and due to start the feature race from pole position before it was called to halt, Queensland visitor Erik Wallace will be hoping for a repeat of his results, while NSW-based Brims brothers Hayden and Zac, along with a host of other genuine contenders, will be looking to hinder his chances this time around.

The V8 Dirt Modified Rumble will be headlined by current and four-time Australian Champion Kevin Britten, who is a sensational addition to what will be a formidable field of drivers. While he won’t be easy to beat, Britten certainly won’t have it all his own way, with multiple other drivers sure to challenge him.

In addition to Hancey, local driver Andrew Firth is somewhat of an expert around the Grafton track, having picked up a pair of feature-race wins earlier in the season, while Corbett brothers Chris and Dale are also likely to fare well.

Gates for Saturday night’s season opener will open at 3pm, with racing to commence at 5.30pm.