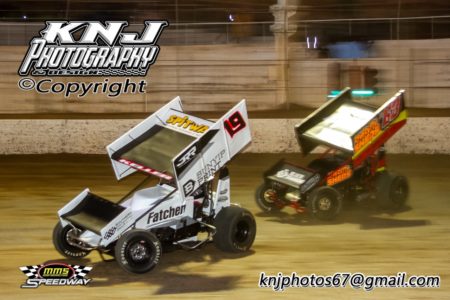 Brad Keller continued his impressive return to Sprintcar racing with his second win in succession as he dominated the opening round of the Sprintcars SA Country Tri-Series at the Murray Machining and Sheds Murray Bridge Speedway. Throughout the night Keller remained unbeaten as he set the fastest time in his qualifying group, won his heat and then went on to lead all 25 laps of the A-Main, setting a new track record (5:51.815) in the process.

Since the meeting had attracted over 120 entries in 10 different racing classes, the opening Tri-Series round ran a modified format of hot laps / qualifying, one round of heats and the feature event. Qualifying proved to be crucial as it set the line-up for the heats (fastest to the front) with the finishing order of the 8 lap heats setting the A-Main starting grid.

Qualifying Group 1 saw Joel Heinrich set the fastest time (12.621), but he was not able to turn the pole position start into a heat win as Mark Caruso won the heat race therefore securing the pole position for the feature race. Second in heat 1 went to Daniel Pestka with Marcus Dumesny and Heinrich completing the top four.

Group 2 was paced by Keller (12.958) and he converted his qualifying effort to a front row start in the main ahead of Lisa Walker, Jessie Attard and Steven Caruso. The big loser of heat 2 was Ryan Jones, who spun in turn four on the opening lap throwing away his front row start in the heat. He would charge back to finish fifth, locking in a 10th starting spot for the finale.

As the green flag fell Keller won the drag race into turn 1 and led the field, a spot he would not relinquish. After starting from position 3 Daniel Pestka dropped back early to fifth but he would rally back to secure the runner-up finish with Mark Caruso having his best run in a 410ci Sprintcar for several season’s as he rounded out the podium. Joel Heinrich backed up his runner-up finish of a month ago with another impressive run to finish fourth while Ryan Jones finished fifth. Jones was running as high as third until a spin with three laps remaining saw him drop back two spots.

Lisa Walker, Glen Sutherland, Steven Caruso, Austin McDonald and Marcus Dumesny completed the top 10. Dumesny was another driver who spun in the tricky track conditions falling back to 10th after he was running just outside the top five.

Round 2 of the Sprintcars SA Country Tri-Series will be staged at the Borderline Speedway at Mount Gambier this Saturday night (December 12).