TRAVISTY driving Randle for final round

TRAVISTY driving Randle for final round 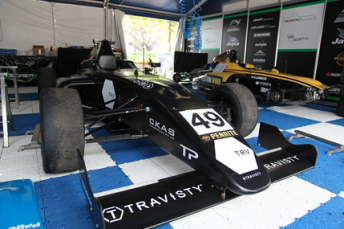 MEDIA RELEASE: Street wear brand TRAVISTY and DREAM Motorsport’s Thomas Randle have teamed up for the final round of the 2015 CAMS Jayco Australian Formula 4 Championship.

The striking black and white livery aboard the #49 DREAM Motorsport car will make its first on-track appearance on the streets of Sydney Olympic Park in Homebush this weekend.

“I just saw the car for the first time today and it looks fantastic. I think it’s going to really stand out there on the race track,” Randle said.

“I’m looking forward to representing TRAVISTY on the weekend, and hopefully it can be a successful weekend and we can continue a partnership for further events.”

Randle, who secured second in the championship at the last round in Phillip Island, is looking forward to racing without the added pressures of racing for a title.

“Definitely! Unfortunately the championship’s wrapped up, but all the pressure’s off. I’m just going to go for it, and it should be a fun weekend,” Randle said.

The partnership with Randle coincides with a relaunch for the TRAVISTY brand, with a new line of clothing due for release in early 2016.

“It is with great excitement that we have teamed up with Formula 4 and the Dream Motorsport crew for this weekend,” TRAVISTY’s founder Travis Wallis said.

“This is perfect timing as part of TRAVISTY’s re-launch, as we prepare to introduce our new directional range with the inclusion of TRV by TRAVISTY which is focused at the youth market.

“The black and white livery looks outstanding. With a young gun like Thomas Randle behind the wheel, it is a great fit for us and is sure to get plenty of attention.

“As a brand we have been working long hours behind the scenes in readiness for 2016. We look forward to the action this week at Homebush and can’t wait to see Thomas in the thick of the action in the TRAVISTY / DREAM MOTORSPORT entry.”