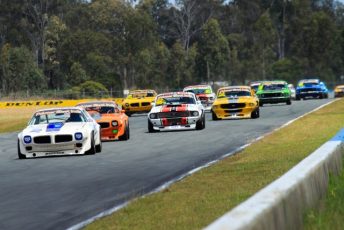 MEDIA RELEASE: The rolling thunder of the Australian Trans-Am Series brings a host of legendary American muscle cars to Sydney Motorsport Park this weekend for the annual Muscle Car Masters.

18 cars have entered for the series’ third consecutive appearance at the popular historic event, a non-championship outing for the swan song to season 2016.

The senior O’Brien will be joined by nephew Shannon O’Brien who returned to motorsport with the Trans-Am series this year following a seven-year hiatus.

Alwyn Bishop is set for his debut race meeting at Sydney Motorsport Park after claiming the Loaders ‘R’ Us Sportsman Class in the Blake Machinery Group/Agilis Accountants Mustang.

The Trans-Am ranks will welcome back Rob Rubis and Porsche Carrera Cup regular Shane Smollen, as well as Queensland Saloon Car driver Lindsay Kearns in a trio of Ford Mustangs.

The latter rejoins the series following a win in the invitational class of the 2016 Bathurst 6 Hour alongside Coleby Cowham.

The field will be further bolstered by Victorian pair Angelo Taranto and Andy Clempson, who return to the series in a Chevrolet Camaro and Ford Mustang respectively.

The Australian Trans-Am Series is set for qualifying and two 8-lap races on Saturday, followed by a further two races on Sunday at the Muscle Car Masters.