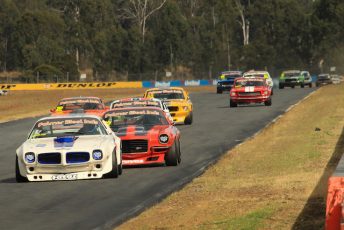 MEDIA RELEASE: The 2016 Australian Trans-Am Series officially draws to a close this weekend at Queensland Raceway, with the Mulch Smart 5 Litre Classic Series title yet to be decided, as well as the remaining podium positions in the Palmer Steel Industries Trophy Class and the Loaders ‘R’ Us Sportsman Class.

As drivers aim to secure the maximum 105 points up for grabs across qualifying and the four races at the Ipswich Classic meeting, punters will be treated to some action-packed racing throughout the thundering 20-car field at the 3.12 kilometre ‘Paperclip.’

The son of former touring car veteran and multiple Australian Trans-Am champion John English holds a 51 point advantage over Hackwood and is weary of his championship rival’s form, who collected four race wins at the penultimate round of the series at Lakeside Park in August in the Wellpro & Mustang Auto Parts supported 1966 Mustang, but has sworn to give it his all in the search for a back-to-back title in the multiple series-winning #44 Mustang.

“All I can do is hope for a good reliable weekend on my behalf in the MPP Race Fabrication Mustang, it will be tough to catch Rob (Hackwood) as he is in a brand new car built for this year’s series which does the lap times of the front-running outright cars,” said English.

Although Australian Touring Car veteran Charlie O’Brien (Chevrolet Camaro – 485 points) sealed his second consecutive championship after claiming pole and clean sweeping all four races at the penultimate round, the battle for second and third in the series will go down to the wire between Brett Curran (Ford Mustang – 360 points) and Shannon O’Brien (Pontiac Firebird – 304 points), with just 56 points separating the pair, while Ian Palmer (Pontiac Firebird – 292 points), John English (Pontiac Firebird – 280 points) and Anthony Tenkate (Ford Mustang – 271 points) also remain in contention to land on the final step of the podium.

It is a similar story in the Sportsman series with Alwyn Bishop (Ford Mustang – 452 points) claiming the inaugural championship after securing an unattainable 175 point lead over Harry Charalambous (Ford Mustang – 277 points) and Dan Flemming (Ford Mustang – 266 points), with just 11 points separating the pair for runner-up in the series.

Although drivers will be putting it on the line to maximise their championship placing, 18 of the drivers in the grid will be looking to keep their car straight given the tight turnaround before a headlining-appearance at the 2016 Muscle Car Masters at Sydney Motorsport Park, in a non-championship capacity, on October 29 and 30.