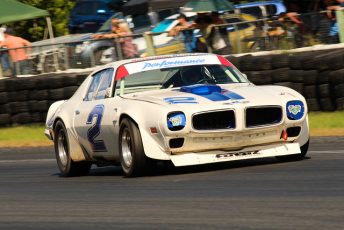 The Performance Wheels Australian Trans-Am Series has reached the business end of the season, heading into the fifth and penultimate round of the series at the annual Lakeside Classic on August 12 and 13.

With 210 points on offer for the remaining two rounds of the championship, Shannon O’Brien (366 points) currently leads the Trophy Series with a 50-point margin over Ian Palmer (316), with Anthony Tenkate (244) a further 72 points behind.

The Sportsman Series remains a two-horse race for the championship between Tony Rutherford (385 points) and Daniel Fleming (245), while the inclusion of Harry Charalambous (Ford Mustang) and series returnees Aldrick, O’Kane and Velt will spice up the action and threaten for class victory.

The Five-Litre Classics Series will come all the way down to the wire at the final two rounds, with only 30 points splitting current series leader Gareth Jones (336 points), Mike Collins (324) and Ron Prefontaine (300). However, class round honours will also be contended by regular Five-Litre frontrunner Mark Bowtell, Len Balme and Tricia Chant.

The Performance Wheels Australian Trans-Am Series heads to the Lakeside Classic with practice on Friday, followed by qualifying and four races across the weekend.