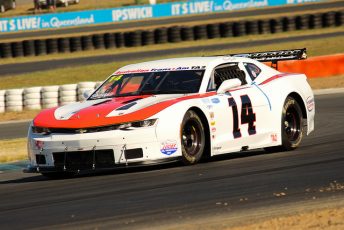 The Trans-Am 2 Australia Series heads to Queensland Raceway for round three of the Queensland season at the 2 Days of Thunder this weekend, as the series partners with the Dry July organisation to promote their campaign within the motorsport community.

Founded in 2007, Dry July is an annual campaign challenging people to abstain from drinking alcohol for the month of July, with funds raised going to 45 cancer support organisations in every state and territory in Australia.

“Dry July started as a challenge between mates back in 2007 to see which one could go the longest without a beer. The guys decided to turn the challenge into a fundraising initiative to support people affected by cancer, a cause very close to their hearts,” said Macdonald.

“The opportunity to have Dry July blazoned on Cam’s car was one we couldn’t resist! We know how much the motorsport community gets behind their teams, and we can only hope to see this level of support for the Dry July campaign.”

Sendall participated in the challenge last year, and is looking forward to promoting the campaign on his Camaro.

“I see it as a great opportunity to help spread the awareness of such a great cause,” said Sendall.

“We see a lot of spectators and other race teams during the course of the racing weekends, so hopefully the more that see it, the more will make a donation to this wonderful cause.

“Anyone that is a racer knows that to win in anything is rewarding, but to win and be able to help others whilst doing it is the best reward of them all.”

Ten cars will line up at the 2 Days of Thunder, including former Saloon Cars racer Ashley Jarvis in a one-off series appearance in a Chevrolet Camaro. The series will also welcome back Canberra racer Chad Cotton with a new look to his Ford Mustang dubbed ‘Sally’.

“While not being able to race this year I have watched the past rounds through live streaming and Natsoft, etching to be amongst the action,” said Cotton.

“Both my team and I are excited about getting back behind the wheel and hopefully getting back to the pointy end of the field.”

Round three of the Queensland Trans-Am 2 Australia Series kicks off at the 2 Days of Thunder on Friday with general practice, followed by qualifying and four races at what has become one of the headline events on the Queensland club racing calendar.