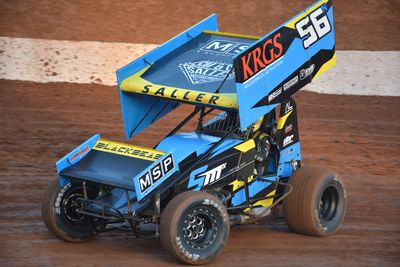 Having proven a huge success despite the best efforts of COVID and mother nature to cause maximum disruption, the 2020/2021 Archerfield Speedway season draws to a close this Saturday night (June 5) with yet another packed program featuring the final round of the East Coast logistics Sprintcar Track Championship and the Wingless Sprint 50-lapper. Over 150 competitor nominations have been received for the event, with Lightning Sprints, Microsprints, RSA Sedans, Open Sedans, Stockcars and Ford vs Holden vs Sigma sedans also on the card in what promises to be a most spectacular season finale.

Given the domination of Lachlan McHugh throughout the ECL Track Championship, very few other competitors have been able to secure much time in the spotlight, with Callum Walker, Cody Maroske and Aaron Kelly the only others in the field who have been able to secure feature race wins this season. Walker and Kelly certainly have plenty of incentive to win again this week as they are locked in a battle to finish second overall in the championship. However, with McHugh currently competing in the United States, this weekend looms as perhaps the best opportunity for somebody else to stand up and secure a result that might just make it easier to justify the time and energy that they commit to their pursuit of success in one of the most unforgiving forms of motorsport.

Ryan McNamara certainly understands how cruel the sport can be, having been denied what seemed a certain feature race win last Saturday night, and there are plenty of others who have endured setbacks, mishaps and misfortunes that have thus far prevented them from securing their moment of glory. The likes of Darren Jensen, Adam Butler, Kevin Titman, Tim Farrell and Brent Kratzmann have certainly delivered plenty of highlights throughout the season, but none have been able to deliver consistently enough to land themselves in victory lane. Of course, given their strong support of the series, it would also be great to see the likes of Mitch Gowland, Kristy Bonsey or Andrew Baumber finish the season on a high, or perhaps it will be Sydney’s Michael Saller or teenager Jy Corbet, who has been extremely impressive in the last two rounds, who will prevail. Of course, the best possible scenario would be for the winner of the Dash to accept the BK Trading Challenge, invert the first 14 cars on the grid for the feature race and, with an extra five laps at their disposal, charge through the field to get the win. It is perplexing that nobody has yet been willing to accept the challenge this season, which offers up an additional $1500 should they be successful in winning the feature.

If the Wingless Sprints are able to dish up a 50-lap feature race as delectable as the display presented by the Midget fraternity last Saturday night, race fans are most definitely in for a treat this weekend. The Midget feature saw three cars still swapping spots for the lead positions right until the fall of the chequer and, if the most recent Wingless Sprint outing at Archerfield is any indication, we can expect more of the same on this occasion. In their last show, the feature race wasn’t decided until the final lap when Dubbo’s Mark Blyton snatched the lead from Robert Mazzer to score his second win in Brisbane for the season, with both Blyton and Mazzer amongst the more than 40 entries that have been received for this Saturday night. The staging of the race less than a week prior to the opening State of Origin Rugby League game is somewhat fitting given that almost half of the contesting the event will be travelling from south of the border. There will be 21 drivers journeying from New South Wales to tackle the Queenslanders on their home soil and the interstate contingent is certainly very strong, with Australian champ Kyle Mock and recent Queensland Championship winner Jason Bates leading the way. They will be joined by the likes of Daniel Sayre, Ashleigh Jack, David Eggins, Jacob Jolley, Kevin Willis and plenty more heavy hitters.

The standouts amongst the locals this season have been Lachlan Robertson, Brody Thomsen, Paul Robinson, Jayden O’Toole and Liam Atkinson, with Robinson and O’Toole perhaps the most deserving of a good result as the only two drivers to have contested all eight events at Archerfield this season. Of this group, only Robertson and Thomsen have registered feature race wins, although the others have accumulated seven podium placings between them. Whilst Robinson has been a particularly consistent presence in scoring top five results on six occasions, with 43 drivers nominated for competition and only half of these ultimately securing a place in the field for the feature race, the heat racing will be ferocious and he, along with everybody else, will need to perform beyond their best if they hope to be anywhere near the front of the field when lap 50 ticks over.

In the wake of producing their biggest field for the season at the Queensland Championship event here two weeks ago, a smaller group of Lightning Sprints have nominated for round 18 of the QLSRA Club Championship. After dominating so much of the season, Tyler Stralow struggled to make any impression during the state title event and will be determined to rediscover the form that has made him the most successful driver in the category at Archerfield this season with three feature race wins. Jason Rae is the only other driver in the field to have scored a feature win, so expect the likes of Jim Kennedy and Sean Iacono to be fired up in pursuit of some season-ending success.

The Queensland Microsprint Championship has lured a few interstaters north to boost the field and bring an extra level of competition. Ben Le Pla leads the locals into battle on the back of his feature race win here two weeks ago, with the likes of Jacob Lynd, John Lawson and Eddie Schwehla also expected to offer strong resistance to the southerners and, if their last couple of outings are any indication, there is every chance that the championship might not be decided until the final lap.

Interestingly, it seems that both the RSA Sedans and Open Sedans have saved their biggest fields for the last show of the year, with more than 40 tin tops to hit the track. Both groups feature a mixture of Super Sedan/Late Model varieties of varying vintages against a collection of Modified Sedan-type models and those of a more standard specification, with the mish-mash of vehicles always ensuring there is plenty of action as the front runners battle each other while negotiating lapped traffic. Of course, those dicing back in the field are, quite rightly, more interested in their own battles than offering the leaders a free pass and this often results in close calls, hard luck stories and unpredictable outcomes.

Gates open at 12.00pm for competitors and online ticket holders only, with general admission ticket sales and entry from 2.00pm. With such a massive program of events, early racing will hit the track from 3.00pm and the main program, which will also feature Junior Sedans, Stockcars and Ford vs Holden vs Sigma sedans, will get underway from 4.45pm. There is no reserved seating for this event, however all patrons must maintain 1.5m social distancing.