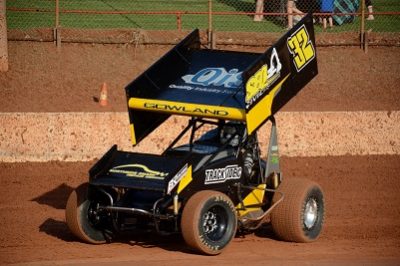 In the wake of their recent Easter heroics, Lachlan McHugh and Luke Oldfield lead the charge for round 13 of the East Coast Logistics Sprintcar Track Championship at Ausdeck Patios Archerfield Speedway on Saturday night (April 14). Of course, McHugh emerged as the Easter Triple Challenge champion with two stunning feature race victories in the opening two rounds while Oldfield, who finished fourth in the opening round and was runner-up behind McHugh the following night, stormed to victory in the final round. In addition to 35+ Sprintcars, the huge program also includes round eight of the Polar Ice Midget Track Championship, along with Formula 500s, Lightning Sprints and Open Sedans, plus fireworks and all the carnage and chaos of a Demolition Derby.

With McHugh having spent much of his season criss-crossing the country chasing World Series success and therefore not a contender for the track championship, his only focus will be securing another feature race win. Oldfield, on the other hand, is locked in a furious fight to defend his track title, sitting third in the standings at the moment after missing the rescheduled round 11. Andrew Scheurele currently leads the championship chase with 569 points, a lead of 51 over Mitchell Gee, who is just 22 points clear of Oldfield. Although he was able to win the title last year after missing a round, Oldfield’s challenge in chasing down Scheuerle and Gee is significant and the current form of McHugh is another hurdle to overcome in his bid to retain his track championship trophy.

Ben Hilder and Peter Lack have been consistently fast throughout the season and currently sit fourth and fifth respectively in the standings without yet being able to break through for a round win, while Brent Kratzmann, David Whell, Callum Walker, Mark Pholi and Brad Ayers round out the top ten in the series. However, the absence of Walker with a season-ending injury leaves the door open for the likes of Mitch Gowland, Andrew Marks and Stewart Craig to climb into the top ten over the remaining rounds. Others not chasing the championship but likely to feature in the thick of the action include Bryan Mann, Allan Woods, Mick Sauer, Mark Pholi and Brock Dean, for whom it will no doubt be an emotional night following the death of team owner Rob Kyle earlier this week.

In Polar Ice Midget action, Scott Farmer and Darren Vine will resume their battle for series honours, taking on Australian Grand Prix winner Reid Mackay and defending Polar Ice champion Rusty Whittaker, who is the latest driver to occupy the seat of the #89 Nielson Motorsport entry. Fresh from scoring their best ever Midget results in finishing second and third in the Queensland Championship, Brad Harrison and Dallas Sharp will carry the burden of expectation into this weekend, while Mitchell Rooke and Tim Farrell have also announced themselves as potential front runners with strong performances in recent weeks.

Fresh from yet another interstate win – this time at Bordertown in South Australia – Australian champion Liam Williams returns home on a mission to continue his domination of the KRE Championship Series. Despite facing a field each week that is as strong as anything he has encountered on his interstate excursions, Williams enjoys a lead of more than 100 points in the championship. Tristan Johnson sits second overall ahead of Tomas Partington, Bryn Upshall and Ryan McNamara, all of whom will be in action on Saturday. Although not in contention for series honours, Kristin Brown is a proven feature race winner, as is Kurt Wilson, the current national Lightning Sprint champ who faces a very busy night competing in both categories.

Development Sprintcars and Open Sedans complete the racing program, which gets underway with early racing from 5.00pm. Sprintcar time trials will kick off at 5.30pm, with the main program from 6.00pm. Gates open at 4.00pm and online tickets can be purchased in advance from the track website at www.brisbanespeedway.com.au