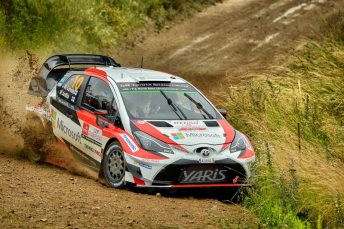 Toyota’s trio of Finnish rally drivers and their Yaris WRC cars are set to fly when the World Rally Championship moves to Finland next week.

Placed third in the driver’s championship, Latvala said he was confident about his prospects while expecting a tough four days.

“Along with Monte-Carlo, Finland is the rally that everyone wants to win, especially if you are Finnish,” he said.

“There’s pressure to do well, but it’s a positive pressure. No doubt about my target: victory.”

Rally Finland is famed for its smooth, fast gravel roads and large jumps. Last year’s event was the fastest rally in WRC history and Rally Finland accounts for nine of the ten fastest WRC rallies of all time.

Latvala has demonstrated the pace of the Toyota Yaris WRC car on fast gravel roads with three stage victories four weeks ago in Rally Poland.

The Toyota GAZOO Racing World Rally Team, which is based in Finland, will also be represented by Esapekka Lappi and Juho Hänninen.

Lappi, who is competing in the top WRC category for the first time in his home country, pin-pointed the Yaris WRC’s strengths.

“Our car should be very well suited to the roads in Finland: the aerodynamics and (1.6-litre turbocharged) engine are really our strong points,” he said.

Hänninen said there was no choice but to push hard from the first stage of the rally.

“The speeds are so fast that you don’t have time to build up to speed; you have to be awake from the first corner,” he said.

Rally Finland, the ninth round of this year’s championship, has 23 stages with 315.63km of competition.