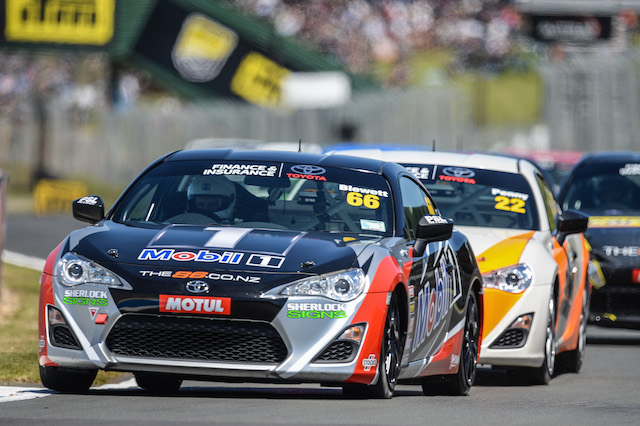 MEDIA RELEASE: Experienced single make racer Ash Blewett of Auckland is watching his mirrors going into the second round of the 2015-2016 Toyota Finance 86 Series with a pursuing pack of 15 drivers looking to topple him from the championship lead.

Though he took three wins from three starts to lead the championship in the first round, held at Pukekohe, Blewett says he is expecting a battle at this weekend’s second round, held on the fast and undulating 2.6km Hampton Downs circuit in the northern Waikato.

“Everyone got quicker over those first three races. Things will be much closer at the second round,” he said. Current champion Tom Alexander holds the race lap record for the category at Hampton Downs, a 1:14.210 set in May 2014 during the inaugural championship.

Fourteen points behind Blewett, and determined to close the gap on a track that suits his driving style, is another Auckland driver, Callum Quin. He has been honing his racecraft and car setup over the winter in endurance racing. Third on points is championship newcomer John Penny, also of Auckland.

Albany’s Reid Harker has been locked in a race against time to repair his TR 86 race car after crashing at the first round, but with a fortnight of hard work behind him reports that he will make the start of the second round.

Single-make racer Craig Innes is making his first foray into the current championship, having missed the opening round. He contested Hampton Downs in the inaugural championship in 2013-2014.

Category manager Geoff Short says the opening round, raced as part of the 2015 V8 Supercar event at Pukekohe, put the 16 drivers in front of a race weekend crowd of more than 116,000 in addition to live coverage on SKY TV and on Fox Sports in Australia. He says the chance to put the championship in front of such a huge audience was invaluable.

“This is the biggest event in New Zealand motorsport. Our pit lane was immensely popular with fans between races and the race coverage certainly played a major role in sparking the intense interest in the championship,” he said.

The championship’s growing profile has generated “massive” demand for drives.

“We now have more drivers wanting to join than we have cars available. There is only one TR 86 car left for sale from the current build! In addition, I am very excited to confirm that we now have two Australian drivers joining the championship in January – one from the Porsche GT series over there and another from Australian F4,” Mr Short said.

Toyota Racing New Zealand has agreed to cap the grid at 22 cars and will build another three during the winter of 2016. One of these is already sold.

The 2015-2016 Toyota Finance 86 Championship is exclusive to locally-built TR 86 race versions of the 86 sports coupe which can be leased or purchased from Toyota Racing New Zealand. At stake is the championship title and a sponsored drive at Bathurst 2016 in Australia’s own Pro-Am series for the award-winning 86 sports coupe.

“The Bathurst drive is attracting a lot of interest from drivers. It’s a unique prize and the quickest way to get international profile for a touring car driver on the way up.”