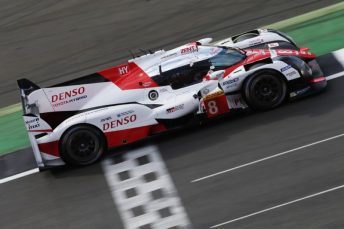 Toyota is taking a calculated strategic step in its preparations for this year’s Le Mans classic 24-hour race by entering three cars for the first time in the World Endurance Championship (WEC) this weekend.

Following victory in the first race of the year at Silverstone last month, Toyota will compete with three TS050 Hybrid race cars in the 6 Hours of Spa-Francorchamps in Belgium.

Cars #7 and #8 will continue to be equipped with a high-downforce set-up that prioritises grip over top speed while the #9 car will introduce and test a low-downforce configuration optimised for the long straights that characterise the Circuit de la Sarthe at Le Mans.

The #7 crew of Mike Conway, Kamui Kobayashi and José María López will be aiming to improve on its pole-winning position at Silverstone. López, who crashed there in damp conditions, is expected to confirm his race fitness in Thursday’s practice sessions.

At the wheel of the new #9 car is team regular Stéphane Sarrazin who is joined by WEC debutant Yuji Kunimoto and Frenchman Nicolas Lapierre, who is returning to the team after a two-year absence.

Spa is regarded as one of the Toyota team’s three “home” WEC events as the circuit is located just 120km from the team’s headquarters in Cologne, Germany.

Opened in 1922, it is the oldest circuit on the WEC calendar and holds positive memories for the team with Buemi, Davidson and Lapierre winning the race in 2014.

Team president Toshio Sato said the first use of three cars would enable the team to fight for victory at Spa while also preparing for Le Mans.

“We made a strong start to the season and we hope to continue this at Spa,” he said. “The competition against Porsche is intense and we are looking forward to another close fight.”

Sarrazin, who is looking forward to racing the TS050 Hybrid again, said the most important thing this weekend was to prepare his car for Le Mans.

“We need to get a lot of data about the low-downforce car and fine-tune the teamwork in our first race together,” he said.