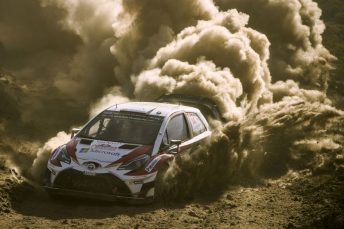 Toyota has taken milestone steps forward in its world rally return, claiming second place overall and multiple stage victories in one of the season’s toughest events, the Rally Italia Sardegna.

Toyota’s Jari-Matti Latvala closed the gap on his World Rally Championship rivals with a hard-fought second place in the seventh round of this year’s title race.

An emphatic performance saw all three Toyota drivers in the points and their first one-two stage finish, pointing to successful progress in developing the Yaris WRC.

Esapekka Lappi finished fourth in only his second appearance for the team, notching up a remarkable six stage wins including the points-scoring final Power Stage. Juho Hänninen, who led the event on Friday, finished in sixth place.

Lappi’s results vindicated the team’s decision to enter three cars in a rally with 313km of competition over 19 stages on narrow, rutted gravel roads lined with trees and potentially car-breaking rocks.

Team principal Tommi Mäkinen gave credit to the drivers, co-drivers, engineers, mechanics and team after a rally that produced some of the hottest and roughest conditions seen in this year’s championship.

“This was one of our strongest rallies without a doubt – the results speak for themselves,” he said. “Of course, we still have plenty more work to do.”

The Toyota team will return to action, once more on gravel, in Rally Poland, which begins on June 29.