Toyota ready for the challenge of Le Mans

Toyota ready for the challenge of Le Mans 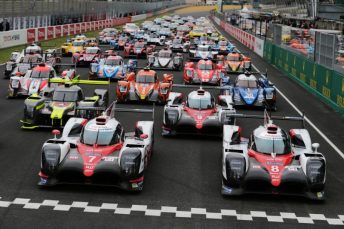 Toyota travels to this year’s Le Mans 24 Hours classic determined to succeed in taking an historic first victory in the world’s most famous sportscar race.

The team is undaunted by last year’s drama when fate intervened to snatch victory from their grasp within minutes of the chequered flag.

They travel to the La Sarthe circuit in northern France as the leaders in the FIA World Endurance Championship, having claimed wins in the opening two rounds of the season.

Their strong form owes much to the intensive development of the Toyota TS050 Hybrid race car at Toyota’s Higashi-Fuji test centre in Japan and at the team’s base in Cologne, Germany.

This year, the Toyota team will field three cars in their quest for a long-awaited Le Mans victory with Mike Conway piloting the No. 7 car alongside Kamui Kobayashi and Stéphane Sarrazin

Conway said Le Mans is the highlight of the team’s season and the focus of a huge team effort.

“What happened last year is in the past, now we are focused only on this year’s race and we expect to fight at the front again,” he said.

Driving duties in the second car will be shared by Toyota’s 2014 world champion Anthony Davidson and Sébastien Buemi and Kazuki Nakajima.

The third car drivers are Nicolas Lapierre, a podium finisher for Toyota in the 2014 race, and Le Mans rookies Yuji Kunimoto and José María López.

Le Mans represents the spirit of endurance racing, featuring almost 35 hours of driving including practice, qualifying and the race itself which starts at 3 pm local time (11 pm AEST).