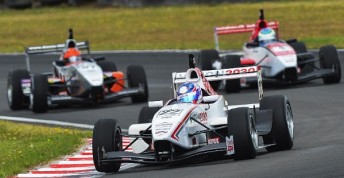 Toyota Racing New Zealand has announced the championship calendar for the 2015 Toyota Racing Series will include a return to Ruapuna near Christchurch and also to the Taupo circuit.

The coming season features two South Island rounds and three in the north, with the five week championship starting at Ruapuna and finishing as always with the New Zealand Grand Prix at Manfeild near Fielding.

The Toyota Racing Series pits the fastest rising stars of New Zealand motorsport against top international drivers in a fifteen race Gold Star championship that offers drivers the chance to win some of the most prestigious trophies in New Zealand motor racing.

Category manager Barrie Thomlinson says Canterbury sports fans can look forward to spectacular racing with the return of the series to Mike Pero Motorsport Park at Ruapuna on January 17-18. The Toyota Racing Series last included the challenging circuit during the 2008-2009 season.

“Toyota Racing Series is a unique chance for rising Kiwi drivers to get valuable ‘wings and slicks’ experience in a real team environment before starting their international careers.

“Ruapuna is a firm favourite with drivers and teams, so we’re rapt to be able to race there again. Team managers and talent-spotters around the world are watching closely as we finalise details for this year’s championship,” he said.

Barrie Thomlinson says the championship’s return to Taupo after a year’s absence will also be popular with local and international drivers because the high speed straights, fast turns and technically challenging infield corners of the Taupo track have a strong European character to them. This track hosted the New Zealand round of the A1GP championship in recent years and TRS last raced there in 2013. Taupo will be the penultimate round of the coming championship.

Many young drivers who have risen through the ranks of TRS in recent years are making their mark at the highest level in international motor racing. New Zealand and international race drivers now competing in Europe and Asia include Brendon Hartley (FIA World Endurance Championship), Richie Stanaway (currently third in GP3), Mitch Evans (double TRS champion, youngest ever Grand Prix winner when he won the New Zealand GP in 2011, 2012 GP3 champion and now racing GP2) and Russian driver Daniil Kvyat, now racing in Formula One with Red Bull.

This year, drivers will be racing in a new ‘wings and slicks’ single-seater car as the championship steps up from its existing FT40 cars to a new FT50 chassis.

The 2015 Toyota Racing Series begins at Ruapuna on January 17-18, then races at Teretonga Park Raceway near Invercargill a week later on January 24-25.

The first northern round is at Hampton Downs Motorsport Park in the north Waikato on 31 January-1 February followed by a return to Ricoh Taupo Motorsport Park on 7-8 February and the New Zealand Grand Prix at Manfeild Park on 14-15 February.

The Toyota Finance 86 Championship will also feature on the programme alongside TRS at the Ruapuna and Invercargill rounds and at the New Zealand Grand Prix.