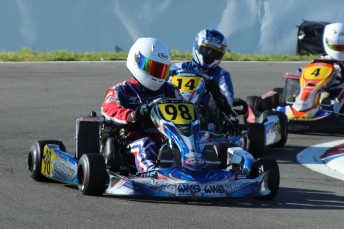 Convenor John Paddy expects more than 120 school-age karters to make the trip to the Manawatu to fight for school and individual class honours.

“The annual Schools’ event is one of the biggest events on the national karting calendar and this is the first time it’s being held in the Manawatu,” says Paddy.

“It’ll be our pleasure to run it with the support of Toyota Racing New Zealand.

“Palmerston North has long been one of the strongholds of karting in New Zealand and host school Palmerston North Boys’ High is the only school to have won the National Secondary Schools’ title three times.”

The Toyota Racing Series is New Zealand’s premier single-seater racing car category with drivers from around the world flying in each summer to take on New Zealand’s best in a multi-round, consecutive weekend series which culminates in the New Zealand Grand Prix meeting at Manawatu motor racing circuit Manfeild.

Last year that series was joined by a second Toyota-run series, the Toyota Finance 86 Championship for Toyota TR86 two-door sports coupes. Both cars will be on display at the track over the National Schools weekend.

Since its inception in 2005 a steady stream of talented young karters have passed through the Toyota Racing Series.

“If karting is the first step on the motor racing ladder we’d like to think of the Toyota Racing Series as the second if you want to go the single-seater route, and our new Toyota Finance 86 Championship as the alternative if you prefer tin tops,” says Boyce.

A number of talented young New Zealand karters have already used the Toyota Racing Series as a springboard to a career on the world stage.

Each year two awards are offered and this year the awards – and prize of a drive in a Toyota Finance 86 Championship TR 86 race car – will go to the winners of the two most popular eligible classes at the event – once they produce and present a project at their school on the career, achievements and values demonstrated by the driver the award honours, New Zealand racing great Bruce McLaren.