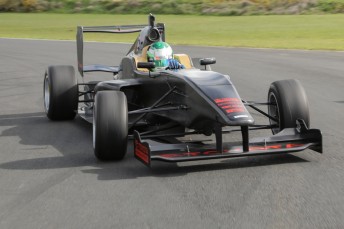 Toyota Racing New Zealand has launched the new FT50 race car for the Toyota Racing Series, describing the new car as a significant step forward featuring the latest in race car technology and safety and a worthy successor to its predecessor.

The TRS is New Zealand’s leading single-seater category and the new FT50 will be raced by all teams and drivers in the 2015 championship.

In its first ten years the series has consistently attracted talented international drivers to New Zealand to hone their racing skills during the northern hemisphere winter, meaning TRS also gives young Kiwis a chance to gauge their speed and skill against the drivers they are likely to meet on circuits in Europe, Australia, Asia and the USA.

“This is a car for the future and a significant step up for young drivers seeking experience in our leading ‘wings and slicks’ category. We have taken a bold step forward in driver safety, technology and driving dynamics to ensure the championship continues to provide drivers with a world-class driving experience,” Mr Boyce said.

Category manager and race driver Barrie Thomlinson says the arrival of the FT50 ushers in a new era for TRS. The new car is “simply stunning”, he says, and will ensure TRS remains at the leading edge of driver development.

“Tatuus have delivered us a beautiful car which we can all be very proud of and the teams and drivers can look forward to facing a new challenge as we look to the future. As always we remain 100 per cent focused on our core mission of developing young drivers’ skills in the cockpit and this car will enable us to continue to do so.”

Mr Thomlinson says the championship has propelled many young Kiwi drivers onto the world stage and the top echelons of motorsport.

The new car has been tested in Italy and New Zealand, with multiple TRS champion Nick Cassidy driving the car at the Italian shakedown tests and twice TRS champion Daniel Gaunt handling the testing duties in New Zealand at Hampton Downs and Taupo.

Both drivers agree that the new car will be a valuable platform for drivers seeking to move up the international single-seater ladder.

Mr Thomlinson says the data obtained from each test will be used to decide on the final set up specification of the car prior to the individual race teams taking over for the 2015 series.

“It’s going to be very exciting to see the drivers and teams work with this new car and we are sure those who have worked so hard to make this new car a reality will be pleased with the outcome,” he says.