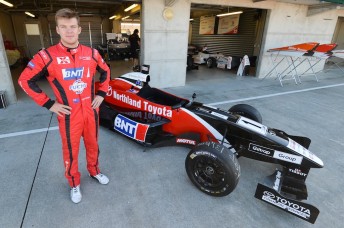 The two-day Toyota Racing New Zealand 2014 National Schools Championship meeting will be contested at the KartSport Manawatu club’s Manawatu Toyota Raceway over the weekend of July 12-13.

It is the first time the event has been held in the Manawatu in New Zealand’s North Island and organisers expect more than 120 school-age karters to enter.

In 2013 that series was joined by a second Toyota-run series, the Toyota Finance 86 Championship, which provides a longer-duration but no less exciting platform for drivers to race at New Zealand’s best circuits.

“For many drivers, karting is the first step in a motor racing career. We see TRS as the final preparation for drivers before they launch their careers onto the world stage, while the TR86 route will appeal to those who are looking for careers in ‘tintop’ racing, or who are not yet ready to step up to a TRS drive,” he said.

Both TRS and TR86 race cars will be on display at the track over the National Schools weekend.

Each year two awards are offered and this year the awards – and the prize of a drive in a Toyota Finance 86 Championship TR 86 race car – will go to the winners of the two most popular eligible classes at the event.

“This desirable prize and our sponsorship of the event are further demonstrations of our support for New Zealand’s budding race drivers as they make their first steps into a motorsport career,” said Mr Boyce.