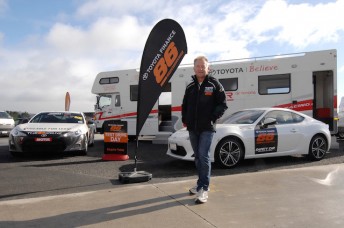 MEDIA RELEASE: Toyota is looking to bolster the grid of the Toyota Finance 86 Series with the appointment of Geoff Short as the series co-coordinator.

Short will be responsible for attracting more support for the series and encouraging more drivers to compete in the championship, which already has guaranteed television coverage.

“We wanted to put a proper focus on the 86 series,” said Steve Boyce, Toyota New Zealand’s manager of motorsport. “That required a dedicated coordinator to concentrate just on the Toyota Finance 86 Series.”

For the first two seasons the 86 Series has run under the umbrella of the international single seater Toyota Racing Series.

“Toyota has realized to get the series going properly they needed to commit more support,” said Short. “My role is to make that happen.”

Short’s plans for the Toyota Finance 86 Series include running a celebrity car at each of the six rounds and a scholarship car for a young driver, subject to appropriate sponsorship being obtained.

“We want to focus more attention on the series for the betterment of everybody,” said Short, who has had a varied career in motorsport.

Recently he was the contracted commercial manager for Motorsport New Zealand for 14 years, responsible for arranging the sponsorships and marketing of the various national championships. As a driver he competed in the Sentra series, Porsches and two litre touring cars.

Short believes the Toyota Finance 86 Series is the most cost effective way young drivers can advance their careers in saloon based categories if they have V8 Supercars as an ultimate goal.

Next summer’s 86 series is being showcased at next month’s CRC Speedshow, and rounds of the North Island Endurance Series and the Manfeild Winter Series over the next few months.

The cars have already had success in the endurance series, taking all three podium places in the under two litre class at the opening round at Taupo.

“We know the cars are quite capable from the sprint races over the summer,” said Short.

“Now we know they have endurance reliability too.”

The full calendar for the Toyota Finance 86 Series is: