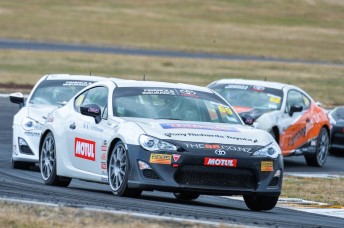 New Zealand’s leading one-make sports coupe racing series, the Toyota Finance 86 Championship, returns to the track this weekend with a vengeance and the top five drivers from the inaugural year are back to do battle once more.

Returning racers including the champion of the inaugural season, Jamie McNee, experienced one-make racers Ash Blewett and Callum Quin (second and third in the 2013-2014 series), Aucklander Tom Alexander (fourth in 2013-2014) and Matt Gibson (fifth in 2013-2014) will once more take Toyota’s purpose-built TR86 race cars into wheel-to wheel competition on the high speed straights and challenging corners of the Ricoh Taupo Motorsport Park as part of the opening round of the BNT NZ V8 Supertourer series.

“This is a fantastic endorsement of the championship and we are looking forward to some exciting and spectacular motor racing this weekend,” he said.

The youngest driver on the grid will be 14 year old Marcus Armstrong of Christchurch, who contested part of the inaugural championship at the beginning of the year and has been making a name for himself in karting at national level and internationally.

Multiple New Zealand rally champion and race driver Neil Allport has entered in his own car.

New to the series is Cory Holmes, a racer with a surname that will be familiar to rally fans: his father is Stumpy Holmes, 1999 New Zealand group N rally champion. The next generation of the family, Waiuku-based Holmes comes to the TR86 grid with Ministock and speedway experience and was second in the 2013-2014 Formula First championship.

There is even an international entry: Bruce Thomlinson from Australia joins Ash Blewett to make up a two-car West City Motorsport team.

The championship enters its second season with the promise of exciting racing at every round. Fought out over six rounds with a substantial prize purse at stake for the winners, it is designed to enable young racers to gain skills and experience in modern race cars on New Zealand’s most exciting and spectacular circuits as they advance their racing careers.

The cockpit features competition seats, racing harnesses and steering wheel, with data provided to the driver by a Motec C125 colour screen dash.

The 2014-2015 Toyota Finance 86 Championship is open to New Zealand-built TR 86 race cars and will be contested over six rounds. It has its own TV package (screening on the Friday after each event) and features races at V8 Supertourer, Toyota Racing Series and independent race events on circuits from Invercargill to Auckland.

Race action this weekend at Taupo takes place on Saturday and Sunday with TV coverage next Friday on SKY.