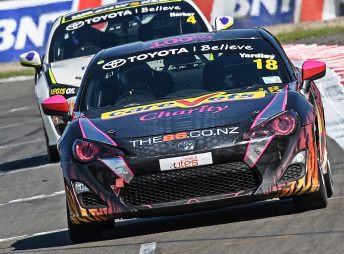 Racers keen on the 2017-2018 Toyota 86 Championship have less than a fortnight to apply for a scholarship drive with the champion team – and category manager Geoff Short asks where better to sign up than at the annual CRC Speedshow this weekend in Auckland?

“The call for entries went out at the start of the month and there’s been strong interest from throughout the country – but this weekend we’ll be at Speedshow in force with Ryan Yardley’s championship-winning car and information about the scholarship that put him on the road to success,” said Mr Short.

Yardley, of Christchurch, was one of the first recipients of the CareVets scholarship when it was first offered two years ago. He stayed with the two-car team and won the 2016-2017 Championship outright in a CareVets 1-1 result, team-mate Jack Milligan winning rookie of the year.

The CareVets Racing team, set up by CareVets boss Keith Houston, has been a mainstay of the championship and offers the successful scholarship driver a professional team environment from which to base their championship season.

Mr Short says the best way to contest the championship is in a two-car team where drivers can exchange set-up data and help each other get to grips with the challenges of one-make racing.

“The scholarship winner automatically enters this professional two-car team environment. For those who can’t make it to Speedshow, the scholarship application info is also on the website, carevets.co.nz – and applications close July 28, so you need to be quick to be in,” he said.