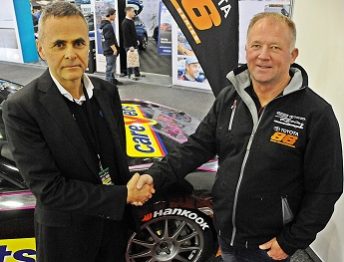 The category manager of the Toyota 86 Championship has announced a switch to a semi-slick tyre from Hankook for the 2017-2018 series.

At the CRC Speedshow in Auckland, Geoff Short said the decision came after extensive on-track testing of six brands and means drivers will have an ‘all new’ championship thanks to the different performance profile of the tyre.

The Hankook tyre was the fastest and most consistent of the six tyre brands tested.

“We are moving to a tyre that delivers amazing consistency both within a race and across a whole weekend of racing. Over 90 laps, the tyre dropped just two tenths of a second – that’s the equivalent of a full weekend of racing. It’s great in dry conditions and delivers ‘intermediate’ performance in wet conditions,” he said.

The test was carried out over two days at Hampton Downs and Mr Short said in the hands of a range of drivers the new tyre proved only 8/10th s of a second slower than the full slick tyre also tested.

Toyota’s partnership with Hankook will halve the cost of tyres to competitors across a full championship through the tyres’ durability and consistent performance.

“This change makes the championship much easier for racers to afford. It’s a leveller too, because the cars will feel different and we think a semi-slick tyre will make them easier to drive, more predictable on the limit.”

Hankook will partner the Championship for two years, giving racers certainty of specification over the medium term.

“Toyota Racing’s approach is totally professional and very impressive. We are looking forward to working with the team over coming months and into the race season,” he said.

The tyre change also means an adjustment to the championship regulations, with a full ‘wet’ tyre available separately to each driver’s allocation of the semi-slick tyre and racers now subject to the direction of race control when conditions dictate that a race be declared wet.