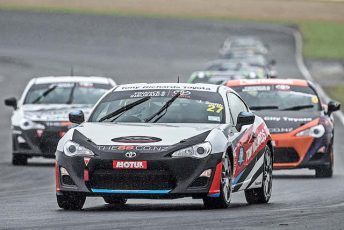 MEDIA RELEASE: There is just a month until the cars take the track for the championship’s opening round but already, all of the lease cars held by Toyota Racing New Zealand have been committed and all but three of the new-build TR 86 race cars are sold.

In addition, the existing race cars used in the series have been changing hands as new and returning race drivers finalise their plans and sponsorship to contest the six-round, 18 race championship.

Category manager Geoff Short says demand is ‘through the roof’, driven in part by the success of the most recent championship.

“We are now confident of having up to 22 cars on the grid from the opening round and will cap the field at 24, which would mean every existing TR 86 available to us is spoken for. With 2015-2016 champion Ash Blewett about to race in the Australian 86 series at Bathurst there is potential to create a trans-Tasman challenge with Australian drivers now keenly interested in our series,” he said.

The opening round puts the championship in front of a trackside audience of 120,000 or more over the three days of the V8 Supercars round at Pukekohe.

Mr Short says he is confident the racing will be close, fast and spectacular.

With Christchurch driver Jack Milligan winning the 2016-2017 CareVets scholarship Mr Short says up to four of the other eleven finalists aim to contest the championship in their own right.

“The scholarship showed us a depth of driving talent and at the same time gave the finalists an insight into how the championship operates and all the work we do to make it so professional.

“With new drivers coming in, a number of drivers coming back to shoot for the title and this frenzy of buying activity threatening to snap up all the existing cars the championship really is looking in great shape and fulfilling its goal of being a great stepping stone for young drivers on the way up.”