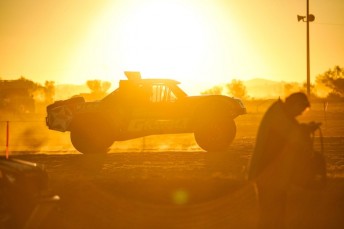 MEDIA RELEASE: Finke – An elite squad of Team Toyo racers is looking for a podium in Australia’s most dangerous race.

Coinciding with the 40th anniversary of Toyo Tires in Australia, the tyre manufacturer has selected a team of elite drivers to lead the largest field of competitors ever seen at the 40th annual Finke Desert Race.

Team Toyo is made up of former ‘Kings of the Desert’ winners and legends of the Finke.

Drivers, navigators and race teams will rely on the resilience and grip of the rugged OPM/T-R in 35, 37 and 39-inch constructions to tame the unpredictable desert terrain.

Over its 40-year history the Finke has evolved from an endurance event to an outright desert sprint. 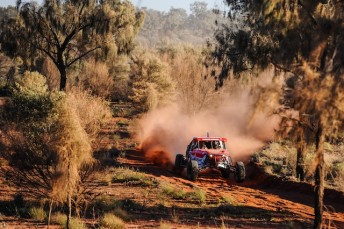 A trophy truck won the Finke outright for the first time in 2011, and Team Toyo’s Greg Gartner was behind the wheel.

This year Gartner will campaign the Toyo-shod #410 Ford F150 trophy truck over constantly shifting terrain between Alice Springs and Finke.

South Australian and long-time Toyo man Brad Gallard followed Greg’s winning example by winning Finke in his trophy truck in 2012. In the 40th Finke, Gallard will drive the much anticipated #454 PKMS Trophy Truck, powered by a 5.8-litre NASCAR-spec Toyota V8.

Also running a Toyota PH9 NASCAR motor, 2007 and 2013 King of the Desert Hayden Bentley will be screaming over the sand on Toyo OPM/T-Rs, with the aim of reclaiming the throne in his new Racer Engineering #418 trophy truck.

Team Toyo’s Billy Geddes has cemented himself as a legend of the sport after a ninth in 2012, fifth in 2013 and last year becoming the first ever Finke Iron Man.

Geddes has gifted his red #441 truck ‘HellBoy’ with a new engine package that will see the trophy truck spearheading the field.

“We have assembled the best team and the best cars and then given them the best tyres. A Team Toyo result at Finke’s 40th anniversary, coinciding with Toyo’s 40th year in Australia, would be an amazing achievement. We have taken the necessary steps to make it happen,” he said.