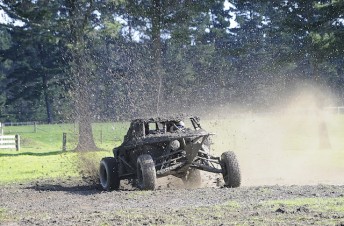 He will run the Jimco again this year, putting LeDuc in his Honda turbo powered Cougar single seater, and the Geiser brothers Pro 2 Ford will be driven by Aiden Mercer.

The three-car entry is the biggest single international presence in the history of the flagship two-day, 1000 km race.

The NZ1000, formerly the Taupo 1000, is held every two years and challenges the fastest race teams to complete 1000 km flat-out over two days in the production pine forests of the North Island’s central plateau.

Organiser Ernie Hogg says the 2015 course is based on a 50 km lap near Lichfield, north of Tokoroa.

For the first time, the race course will include short tunnels, along with several steep firebreak downhills, tight forest tracks and wide, fast rally-style sections where the top cars and trucks will reach speeds of around 200 km/h. He says the new course will be an “equaliser” for all teams because it has never been used in offroad racing before.

“We’ve plotted a really challenging course for all competitors. There is enough fast open running to keep the bigger cars and trucks in the sharp end of the race, but in the skid tracks and link roads the smaller cars will dominate,” said Hogg.

By the start of August – and the end of the regional rounds of the championship – intention forms had been received from more than 70 drivers and teams, and the target entry of 100 was looking strong.

Biggest turnouts so far are in the unlimited-class race cars and trucks. In the top truck class Cooper team entrant Aiden Mercer goes up against regular ‘1000’ names including Donald Preston, Carter Strang, Martin van der Wal and Justin Leonard, with Jono Climo, Craig Westgate and others filling out the ranks for a potential field of 15-20.

Albany driver Richard Crabb has his Chenowth/Eagle two-seater, Big Trouble, on the list – the car has won at Taupo before at the hands of Phil and Mike Cameron and is well suited to endurance racing.

The diminutive UTVs have been a growing force in the sport for the past three years, and organisers say they can be expected to slot into the top ten if the conditions are slippery due to their light weight and four wheel drive.

The bravest man in the pack may well be returning national champion Wal Hellier, who is bringing out his original and very quick class seven car to contest the event. The tiny VW powered single-seater car has limited suspension travel and organisers say it may be a tough drive on the second day if parts of the course become rutted.

The 2015 NZ 1000 starts with practice and qualifying on Friday 25 September. The first 500 km of racing takes place on Saturday 26 September and the final 500 km to be completed the next day.