Tough weekend for Evans and Love in Porsche Mobil 1 Supercup 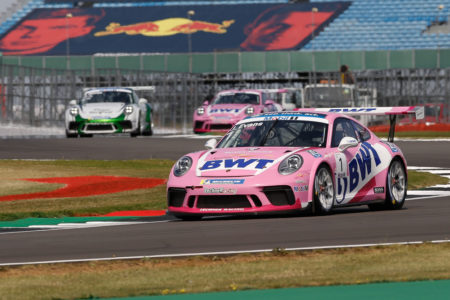 At round five of the Porsche Mobil 1 Supercup 2020 season, held on the occasion of the “70th Anniversary Grand Prix”, Porsche Junior, Ayhancan Güven, took victory after a duel with Larry ten Voorde with Dylan Pereira crossing the line third to defend his overall lead in the international one-make cup.

After having to settle for eighth place last weekend at the same venue, Güven dedicated his first victory of the season to his mechanics. “We’ve improved with the car setup from race to race. We have to keep working in this direction.”

It was a tough weekend for Pereira’s BWT Lechner Racing teammate, Jaxon Evans, finishing in a hard-fought eighth position after a mistake in the last sector of the Silverstone circuit in Saturday’s qualifying, saw him start the race behind the lead pack in eighth.

Jordan Love’s race was over almost before it had even begun. The Australian in the #6 Fach Auto Tech Porsche was taken out on the first lap of the race.

“My start wasn’t too bad, and I was on my up through the field,” Love explained. “I got a push from behind and spun, before being hit by another car. The incident brought out the safety car and my Porsche had to be recovered. I’m really sorry for the team. I was looking to make up ground in the race after a difficult qualifying but never had an opportunity to do so.”

The Porsche Mobil 1 Supercup teams now travel straight to Barcelona. There, they will contest round six this coming weekend as part of the Spanish Grand Prix.