Tough start, but a number of positives for Shaun Thong’s Bentley debut

Tough start, but a number of positives for Shaun Thong’s Bentley debut 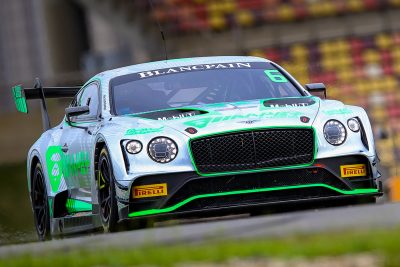 The scoreboard might not show it, but Phoenix Racing Asia’s debut with the second generation Bentley Continental GT3 delivered a number of positives for Hong Kong’s Shaun Thong, the former Blancpain GT Series Asia ‘Silver Cup’ champion putting in an impressive performance in his first drive for the British marque.

“It was a tough weekend overall, but we learnt a lot as a team, and I think the M-Sport engineering team also learnt quite a deal as well,” Thong admitted.

“In a perfect world we would have been able to conduct a full test program ahead of the event, but we didn’t get that opportunity as the cars were rebuilt after the Suzuka 10-Hour and sent straight to Shanghai ahead of opening practice.”

Alongside factory driver Jordan Pepper – a driver with significant Bentley mileage under his belt – Thong was tasked with using his extensive experience at Shanghai to help the team build a solid benchmark for data, and he was quickly up to the pace of the car, but unfortunately, with a full field of experienced teams and little clean air to develop the car properly, both Thong and Pepper were forced to settle for what seat time they could get.

“Ultimately we had a lot to process – in part, because the car is new and hasn’t competed in conditions like those we encountered at Shanghai,” Thong explained.

“The weather conditions we experienced in the UK made the car very drivable, whereas in Shanghai we spent much of our time trying to maximise the performance of the car under low grip and lower temperature conditions than we’d experienced there in the past.

“It was frustrating to be chasing our tails when we’d tested so strongly in the UK, although to be fair, Marchy [Lee] made it very clear coming in, that we shouldn’t expect the car to be a podium contender straight out of the container.

“It will be interesting to see how we fare at Ningbo, which is a very different circuit to Shanghai, but our involvement in the final two rounds really was to be a glorified test session allowing the drivers and the teams to get comfortable with the car and prepare for the 2019 season.

“The car looks great but it is really a different type of car to drive than the cars I’ve spent much of my career in, and I’m looking forward to being able to push it further towards the front of the field as we move towards an assault on the championship next year.”