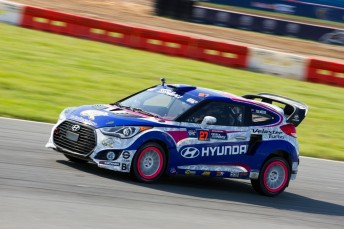 Edging closer to claiming a place in her first Red Bull Global Rallycross Championship (GRC) final, Emma Gilmour was encouraged by her improvements at the Florida round this weekend.

Racing at the Daytona international Speedway, on a track nearly double the length of the average GRC track, Emma was fifth in the last chance qualifier (LCQ) today – just one spot outside the four cars that went through to the final.

It didn’t help her chances that the four drivers she was vying with were Joni Wiman, Sverre Isachsen, Scott Speed and this sixth round’s eventual second place-getter Ken Block.

“It was unfortunate that these guys hadn’t qualified earlier as they are all round winners and podium placers from previous rounds, so it made for a tough LCQ,” Emma says.

She had been making gains all weekend in her Rhys Millen Racing Hyundai Veloster Turbo, finishing heat one in third place. With the car running well, Emma was feeling confident going into the semi-final and she had a good start but got caught up in two cars, which spun in front of her.

“I had to reverse and ended up last in the semi final, which meant I was in the LQC. That’s the nature of the beast though, sometimes you just need a bit of luck. The car speed was there, we just need to keep working on it.”

“I am happy with the way I drove this weekend and enjoyed the racing it’s just a bit frustrating to have not made the final.”

There is now a month-long break before the double-header round in Los Angeles on September 20 and 21.