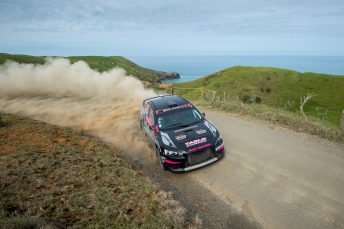 This weekend saw Cox Motorsport compete in Rally of New Zealand the sixth and final round of the New Zealand Rally Championship. After a season of mechanical issues and disappointment, the Cox Motorsport team were headed into this event with high hopes for another podium finish.

The event started out as the team had planned with driver Sloan Cox and co-driver Sarah Coatsworth setting the second fastest time in stage one, on the heels of New Zealand’s World Rally Championship driver Hayden Paddon. With the pair showing excellent speed and enjoying the amazing roads of Raglan, the Cox Motorsport team had high hopes for the stages ahead.

Stage two of the rally started out feeling great and the split times were looking good for another brilliant result, however 8kms from the end of the stage the gear selector cable failed and the Taslo Engineering Mitsubishi Evo X got stuck in first gear and the team lost over four minutes. Cox managed to get the car into third gear and nurse it back into the service park in an attempt to fix the issue and continue the day’s stages. Once in the service park the decision was made to withdraw from the event and re-join later in the day to ensure the problem was fixed correctly.

The team rejoined at stage four and Cox was third through the stage however a new brake problem occurred and the decision was made to take the Evo X back to Taslo Engineering in Rotorua. This enabled the service crew to repair and thoroughly check the car so Cox could continue setting competitive times for Sunday’s racing.

With the rally car successfully repaired, Sunday started off with enthusiasm, however a tyre change, further brake issues and a misfire in the first stage disheartened the team. Again Cox had to retire to ensure the car was repaired and able to compete in the afternoons stages.

The remaining stages in the afternoon were used to gain valuable seat time and restore the Cox Motorsport teams faith and passion for rallying. A second, third and fifth quickest stage time followed and boosted the confidence in Cox’s pace.

The team now turn their attention to preparing the Cox Motorsport Hillclimb Beast for the 2018 NZ Rally X Series and Leadfoot Festival 2018. Cox will be challenging for first place at Leadfoot after finishing second earlier this year. To keep up to date with the team’s plans during the off season, make sure to follow us on www.facebook.com/CoxMotorsport and www.twitter.com/CoxMotorsport