Tough day at the office for Gilmour

Tough day at the office for Gilmour 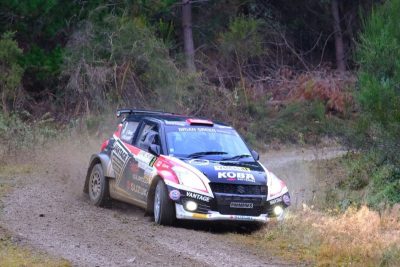 Emma Gilmour and co-driver Anthony McLoughlin ended up with a broken front diff in the Vantage Windows and Doors Suzuki Swift AP4, which derailed their chances of earning points in the challenging Lone Star Rally of Canterbury today pic: Geoff Ridder

The slippery forest roads north of Christchurch proved an immense challenge for the Lone Star Rally Canterbury drivers, with Emma Gilmour among the many casualties at today’s event.

Many of the front-runners in the Brian Green Property Group New Zealand Rally Championship classes were sidelined due to the stages being run on narrow tracks between trees, that were deep in mud and covered in grip-debilitating pine needles.

The often treacherous roads did however make for a superb battle, with numerous lead changes throughout the one-day event. Emma and co-driver Anthony McLoughlin made it through the majority of the carnage, only for the Vantage Windows and Doors Suzuki Swift AP4’s front diff to break in stage 7.

“It was just a tough day at the office today. We were struggling with handling issues throughout the rally and they got progressively worse until eventually the front diff broke,” Emma says.

The team was forced to make the decision to retire, as with two stages to go, safety was paramount and with the possibility of more damage to the gearbox likely, pulling out was the best but hardest decision.

“We are really disappointed. This rally was a great opportunity to capitalise on Hayden Paddon not competing but we were unable to take advantage of the points opportunity after sitting in third place in the NZRC going into this third round of the NZRC. On the positive side this is our first DNF since this event last year, so at least we are achieving some good consistency,” Emma says.

There are three weeks now until the next NZRC round, which heads to the south of the Canterbury region and Emma will take that time to bounce back from today’s result and focus forward on the next event.