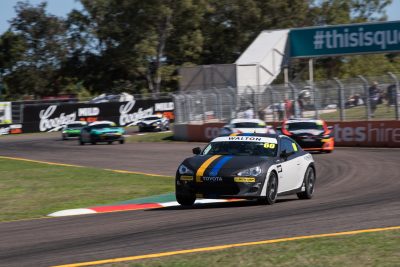 Cam Walton enjoyed a competitive top ten weekend in what was his street circuit debut in Townsville.

The second round of the Toyota 86 Racing Series presented a unique challenge for the British driver, who had never raced on a temporary street circuit before. Walton revelled in the opportunity to end the weekend with three top ten finishes in the competitive 33 car field.

It was not all smooth sailing for Sydney based racer, however. Walton’s Toyota 86 race car and equipment were significantly damaged during the 2100km transit to Townsville, leaving his small team on the back foot from the get-go.

“The guys did an incredible job all weekend, and I feel so grateful for the unfaltering team attitude which was spot on,” Walton said after the weekend.

“My preparation was compromised far less than it would have been with Luke, Terry and Glen taking on some of my usual responsibilities on top of their own on an already busy meeting.”

Walton admitted it took a little while to comes to grips with the aggressive driving style required to make the most of driving on a street circuit which initially hampered his qualifying efforts.

“Lack of circuit knowledge and street circuit experience hurt initially qualifying 13th, but I learnt and moved my way forward to 10th in Race 1” Walton continued.

“I continued my progress forward to finish 9th and 8th in the next two races, finishing Race 3 with much better end-of-race pace than the leaders due to good tyre management in the intense heat.

“It was the steep learning curve but I thoroughly enjoyed the challenge behind the wheel and setting up the car for the tight, flowing north Queensland streets. The Townsville circuit makes for incredible racing with a fast first and second sector before a technical stadium section in front of the huge, enthusiastic crowd.

“We even had a couple new fans come and find us in the paddock after watching the third race, as others recognised or asked about our sponsor Flying Vinyl on the car which was just awesome.

“We attracted a lot of interest that’s for sure.

Walton now sits sixth in the Toyota 86 Racing Series Championship standings, just 22 points behind the top 3, with 300 points up for grabs at each event.

“To come away from what was my first ever street circuit with a hattrick of top tens leaves me feeling very strong going forward, and as a team, we’ve learnt a lot.” said Walton.

“I can’t wait to get to our next street circuit in Newcastle for the final round to apply that knowledge, but before that, we travel to the brand new circuit at Tailem Bend, which is modelled on fast flowing European circuits so it should be a little more familiar to me.”

The Toyota 86 Racing Series will head to The Bend Motorsport Park at Tailem Bend, South Australia for the next round on August 24-26, as always alongside the Virgin Australia Supercars Championship.