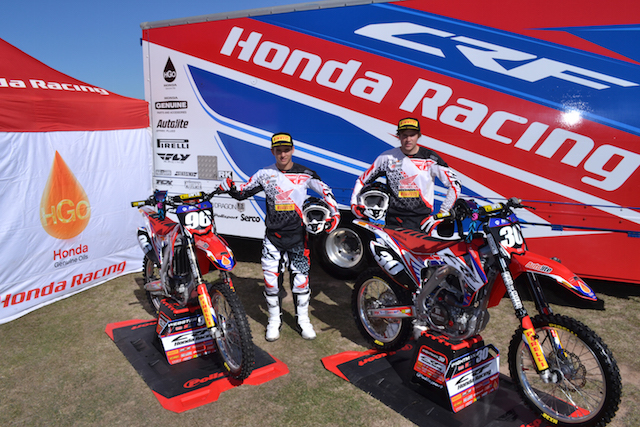 MEDIA RELEASE: The 2016 season of Motul MX Nationals racing is complete, with a spectacular final round staged at Coolum on the Queensland Sunshine Coast yesterday (August 28) that saw CRF Honda Racing team riders Kyle Webster and Joel Wightman once again mixing it with the country’s top MX2 pilots on their way to locking down top ten overall rankings in the prestigious Australian championship.

The notoriously rugged Coolum track lived up to all expectations, by yet again developing into a whooped and rutted sand pit that truly tested man and machine all the way to the final wave of the chequered flag.

Aboard CRF250R race bikes specially decked out with pink graphics courtesy of Serco Motorsport to help raise funds for the National Breast Cancer Foundation, CRF Honda Racing riders Webster and Wightman spent the day giving their all in the final hit out of the ten round MX Nationals championship chase.

Continuing his return to racing after recovering from the third degree burns he suffered at the Conondale round last month, Webster steered his Pirelli-shod CRF to second fastest time in Qualifying and then two strong fifth place moto finishes to finish fifth overall for the round.

“Overall, it was a good day … but it could have been better if I hadn’t been put over a berm on the first lap of the first moto!” Webster explained. “That left me dead last, but I just put my head down and went for it and was pretty happy to get back up to fifth place by the finish.

“In the second moto I got an average start and once again made it back up to fifth, which was okay, I guess. But it was a tough event, and the Coolum track gets gnarly, that’s for sure.”

The fifth overall at Coolum gave Webster ninth overall in the championship, after what can only be described as a motocross season of highs and lows – the highs including a brilliant MX2 moto win at Waneroo in WA in May, and the lows including the first moto crash at Conondale that left him trapped under his bike and the header pipe burning his arm.

“Qualifying just wasn’t what I was aiming for, I just felt a bit off and didn’t gel with the track or the bike,” Wightman revealed. “But we changed a few settings and worked hard to get more comfortable for race day, and in the warm up on Sunday morning it was clear we had made a step in the right direction.

“In moto one I got an average start, but managed to push my way up to 12th by the end of the race, which was okay.

“In the second moto I got my best start of the year but in the bar banging on the first lap I got shuffled back to eighth. But I rode well for the whole moto and pushed my way back up to seventh, which gave me eighth overall for the final round.

“Overall that gave me eighth in the Championship,” Wightman continued, “which is an improvement on 13th last year and I am happy to be progressing.”

“The MX Nationals has been a fabulous championship this year and I am extremely proud of the efforts of CRF Honda Racing riders Kyle and Joel, the mechanics Wighty and Mick, and all our sponsors and supporters,” enthused Luksich.

“Kyle has experienced the highs and lows of racing this year, from winning a moto at Waneroo to being injured at Conondale, while Joel has kept working hard all series long and his climb up the overall standings year on year is a just reward.

“Now the CRF Honda Racing team will shift its focus to the 2016 Australian Supercross Championship, which kicks off at Jimboomba in Queensland on September 17 and I know Kyle, Joel and all the team can’t wait to go racing under lights and in front of the big stadium crowds.”