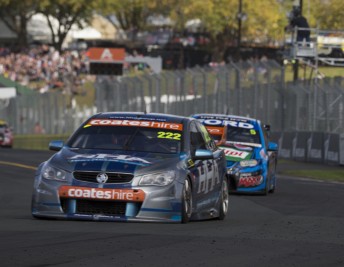 After coming off a season high seventh overall at the last round of the V8 Supercars championship in Pukekohe, Coates Hire Racing’s Nick Percat is using that momentum to prepare for Barbagallo Raceway this weekend.

Percat has fond memories of Barbagallo Raceway; the last time he raced there he qualified third and went on to win his first Dunlop Series V8 race in 2012.

He also enjoys strong local support thanks to winning the 2011 Supercheap Auto Bathurst 1,000 with West Aussie Garth Tander and relishes the challenges of the 2.4 km track.

Since returning to Australia Percat has been working closely with his team to ensure his impressive start to the year continues.

Nick Percat: “I enjoy going to Perth and being the driver that helped Garth win his last Bathurst means I get a lot of support, but maybe not so much this year.

“I look forward to the longer races and it will be interesting to see if we need to make a pitstop in either of the 100km races on Saturday. I think the Sunday race will be quite strategic, as everyone will be balancing their speed versus tyre wear so it will be great for the fans.

“I am hoping to build on the momentum we got rolling in New Zealand, my engineers and crew are working really well and the car has been put together perfectly just like in New Zealand, so I am really looking forward to getting back behind the wheel and seeing where we end up on Friday afternoon, after practice.”