Top ten finish sees points on the board for Gilmour

Top ten finish sees points on the board for Gilmour 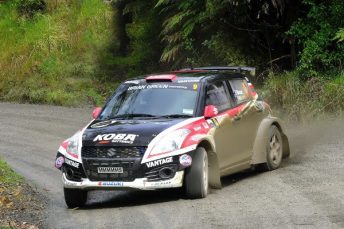 Rally winner Australian Brendan Reeves was only contesting this event as a one-off, which essentially boosts all the Kiwis up a position in the Brian Green Property Group New Zealand Rally Championship (NZRC) fuelled by Gull and driven by Dunlop category. Emma and co-driver Anthony McLoughlin therefore finished the rally as the eighth NZRC team.

“We are happy to get to the finish today in what were some pretty challenging conditions. It was wet and muddy, with intermittent showers making for changeable grip levels. Anthony did a great job navigating our way through what was a rally of many, many corners! Also a big thanks to my service crew – a finish is a nice reward for all the hard work they put into every rally,” Emma says.

Unfortunately from the start of stage one the car’s centre diff was not working properly.

“The car was a handful. We gave it everything on the last of the seven stages and managed to finish third, which was a nice way to finish the event,” Emma says.

Finishing this fourth round of the NZRC will give Emma and Anthony their first points of the season and the confidence to keep pushing hard over the final two rounds in October and November.