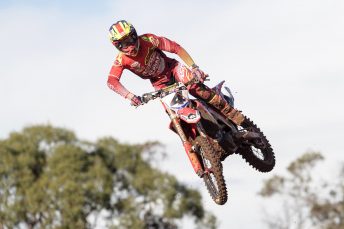 Crankt Protein Honda Racing’s MX1 racers Todd Waters and Luke Clout could barely be separated at the fifth round of the 217 MX Nationals at Muray Bridge on Sunday, with both riders cracking the top six and leaving with 50 points apiece.

For the second-consecutive week, Queenslander Waters established himself as the man to beat by winning the three valuable points on offer in Super Pole, while Clout also qualified for Super Pole, where he posted the fourth-fastest time.

In the opening race Waters and MX1 rookie Clout finished fifth and sixth respectively, with less than 1.5 seconds separating them at the chequered flag.

Both riders finished the first lap inside the top 10 and steadily picked off riders throughout the 30-minute moto.

Waters got a decent jump off the gate and spent most of the race in fifth position, with Clout following closely behind in sixth. Despite chalking up the fastest lap of the race, Waters lost two positions late in the moto, including sixth place to Clout with two laps to go.

As a result of the close racing between the pair, Clout finished the round in fifth and Waters in sixth on count-back. Waters now holds down fourth in the MX1 championship standings, while Clout has moved to seventh overall.

The 2017 MX Nationals now heads into a five-week break, with the action recommencing on 2 July at Nowra, NSW.