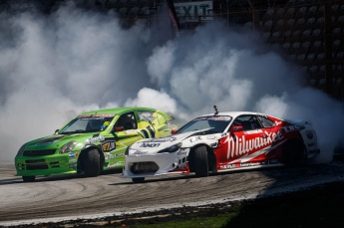 Wellington is set to get its first proper taste of multicode motorsport action since the Wellington 500 street race when the NZ Xtreme Motorsport Series and D1NZ National Drifting Championship debuts at Wellington Family Speedway next year.

It will be the first time the series has ventured to the capital and the first time in over 20-years Wellington has had a fully fledged weekend long motorsport event.

Upper Hutt’s Wellington Family Speedway will host the first round of the 2018 calendar with the grass infield set to be fully paved. The hope is to transform the Speedway into a multi-purpose facility, with provision for drifting, driver training and other events during the year.

NZ XMS Managing Director Brendon White said the move to Wellington will finally give motorsport fans from the capital something to cheer about.

“Its an amazing feeling being able to take the series to Wellington,” White said.

“The lower North Island has a huge fan base and car culture, but finding a venue had always been tough with the contours of the land.”

The first round of the series will coincide with the launch of the NZ Xtreme Motorsport Series. Come January 12-13 drifting, Rally X and UTV racing will all take place at the Speedway venue.

White said D1NZ and Wellington Family Speedway owners will work together to ensure the success of the venture.

“While the track will stay, we need to be mindful that the venue is primarily a speedway during the year and we need to respect neighbors and vested parties involved.

“Some more work towards more events during the year will come to light in the coming months.”

Local support for the event has already begun to grow with Wellington Speedway President Chris Hadley eager to get involved.

“We are extremely excited to be working with the NZ Xtreme Motorsport Series and the team from D1NZ,” Hadley said.

“The joint venture is going to allows us to showcase our facility and further promote both speedway and drifting in New Zealand.”

Upper Hutt City Council Mayor Wayne Guppy put his support behind the move and said he’s excited to have multi-code motorsport back in the region.

“Upper Hutt has a long and proud history with motorsports, with events taking place in our city since I was a kid,” he said.

Only two months later the series went inside ASB Bay Park Speedway for the series’ first Speedway-based drift circuit where Kiwi drifters got a taste of wall-riding for the first time.

White said the experience he and the D1NZ team gained from those ventures gave them the confidence this year to bring drifting to Wellington with another purpose-built circuit.

“The idea of making our own track was never on our radar until last season’s tests, but that’s become a reality now.

“Creating new circuits isn’t out of the realms of possibility for future seasons, but we’re committed now to enhance facilities around the country where people can go drifting.

“Drifting in New Zealand needs to be sustainable. Giving areas like Wellingtonians a place to drift means we can grow the motorsport and keep drifting fun.”

The opening round of the D1NZ National Drifting Championship kicks off at Wellington Family Speedway over January 12-13, featuring drifting, Rally X, Super Moto and UTV racing.