Top five in Shanghai for Heimgartner

Top five in Shanghai for Heimgartner 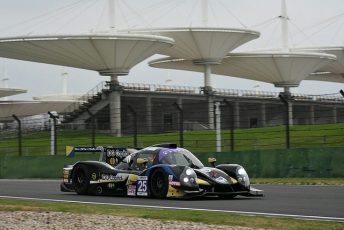 The top five result at the Shanghai International Circuit came after both drivers ran as high as fourth across today’s 60 minute stanza.

Macrow started the race from sixth on the grid, advancing two spots before pitting from fourth to hand the car over to Heimgartner in the compulsory pit stop. As the field completed their pit stops, Heimgartner moved back through the field to fifth before taking fourth place with nine laps to go. With fading tyres on his entry however, he would cross the line in fifth.

“What a awesome experience this has been this weekend,” Heimgartner said.

“It has been really cool to come and see a different series, race a totally different car that is so different to anything else I have ever raced and has so much aero, and try my hand at a very different driving technique to what I am used to – it has been a great tune-up for me and just an awesome experience overall.

“When it comes to results, we definitely had a better day today, and that was pleasing. Yesterday just wasn’t our day but sometimes that happens and you just have to keep on going and that is what we did.

“All in all, it has been a great experience and I definitely would love to have the chance to come back and race with this series again in the future – it was great to get the call-up.”

Sunday’s result comes at the end of what has been a busy weekend for Heimgartner, Macrow and the S & D Motorsports Malaysia outfit.

Friday saw the Kiwi/Aussie combination put the #25 S & D Motorsports Malaysia LMP3 machine in the top four in the first free practice of the weekend, before they secured fifth fastest in Saturday morning’s practice despite a shortened outing due to a bent drive shaft. Prior to that issue being uncovered, Heimgartner had topped the time sheets during his portion of the session.

Two qualifying sessions followed, with the entry punching out the sixth and then seventh fastest times respectively, seeing Heimgartner start Saturday’s opening race of the weekend from seventh on the grid. The 50 minutes stanza started out well for the #25, with Heimgartner holding a strong race and challenging for fifth place numerous times before pitting with 39 minutes to go to hand over to Macrow.

Unfortunately, that pit stop would be called slightly too early and during his stint Macrow would be forced to serve a 204 second stop and go penalty in pit lane, dropping the entry – which had been sitting in sixth at the time the penalty was handed down – to 10th position.

“Saturday was a pretty big day and while things didn’t go our way in the race, every time I jumped in the car I was learning and that really held me in good stead today,” Heimgartner said.

“Sometimes things like that happen and you just have to not let it mess with your head, regroup and get back into it and that is what we did today.”

Heimgartner’s drive this weekend came as a result of a call-up from the FRD LMP3 Series management.